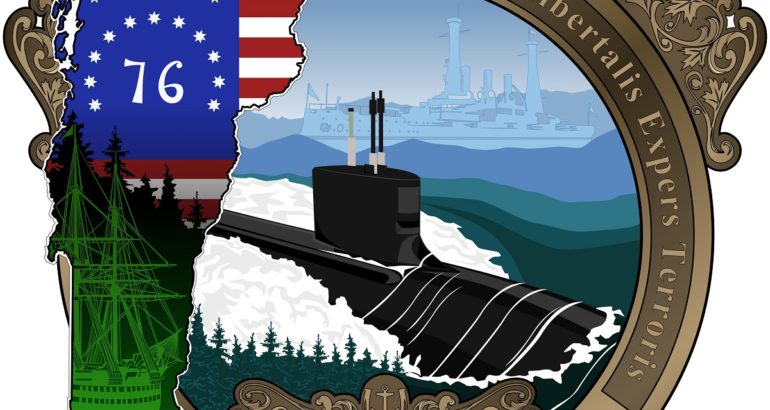 Vermont is the 19th submarine of the Virginia-class, which provides the U.S. Navy with the capabilities required to retain undersea dominance well into the 21st century. Vermont is the first of ten Block IV Virginia-class submarines. These ships embody a U.S. Navy and industry commitment to affordably deliver new submarines to the fleet with unmatched stealth and strike capacity.

“The shipbuilders of Electric Boat are proud to deliver Vermont to our Navy, an extraordinarily capable ship. I am pleased to report that the Vermont has received some of the highest quality ratings in the history of the Virginia program. We wish Vermont and her crew a long and distinguished career in defense of our nation.”

Virginia-class submarines displace 7,835 tons, with a hull length of 377 feet and a diameter of 34 feet. They are capable of speeds in excess of 25 knots and can dive to a depth greater than 800 feet, while carrying Mark 48 advanced capability torpedoes and Tomahawk cruise missiles.

The ship’s construction began in May 2014, and it will provide the U.S. Navy with the capabilities required to maintain the nation’s undersea superiority well into the 21st century.

USS Delaware (SSN 791), the last and final of eight Block III Virginia-class submarines, was commissioned earlier this month. Delaware’s keel was laid April 30, 2016, and was christened during a ceremony Oct. 20, 2018.

Blocks I-III Virginias are planned to undergo four depot maintenance availabilities and conduct 14 deployments. Block IV RTOC efforts are intended to reduce planned availabilities by one to three, and increase deployments to 15. The U.S. Navy refers to this as 3:15.

The Block IV will be followed by the Block V configuration which involves 10 boats and may incorporate the Virginia Payload Module (VPM), which would give guided-missile capability when the SSGNs are retired from service. On 2 December 2019, the U.S. Navy announced an order for nine new Virginia-class submarines – eight Block Vs and one Block IV – for a total contract price of $22 billion with an option for a tenth boat. The Block V subs were confirmed to have an increased length, from 377 ft to 460 ft, and displacement, from 7,800 tons to 10,200 tons.

Next ships in Block IV configuration :