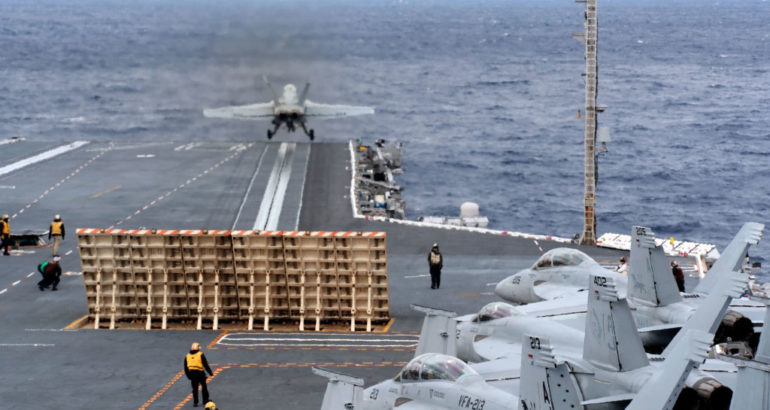 Xavier Vavasseur contributed to this story

The previous record was set in January 2018, when the Ford and Carrier Air Wing 8 team completed 135 traps in a single day. Ford-class carriers with their new Electromagnetic Aircraft Launch Systems (EMALS) and Advanced Arresting Gear (AAG) systems are designed to sustain 160 sorties per day for 30-plus days, with a surge capability of 270 sorties per day. For comparisons, the existing Nimitz-class with its steam catapults can sustain 120/240 sorties per day.

USS Gerald R. Ford has been conducting carrier qualifications for the past few months. The next generation aircraft carrier went back to sea at the end of 2019 following a long maintenance period. It then started Aircraft Compatibility Testing (ACT) off the East Coast in January. And it achieved its 1,000th recovery of a fixed wing aircraft in March. The ACT involved F/A-18E/F, E-2D, C-2A, EA-18G, and T-45C, to prove EMALS and AAG can accommodate the air wing aircraft.

On May 15. 2020, VAW-117 pilots successfully completed carrier qualifications required to transition to E-2D Advanced Hawkeye. Then it was the turn of student naval aviators. The Ford headed south and has picked up student naval aviators who needed to qualify landing on a carrier before they can earn their wings of gold. It preceded the next major milestone for the ship.

About EMALS and AAG

AAG is a turbo-electric system designed for controlled and reliable deceleration of aircraft. The AAG system provides significant benefits over current recovery systems: