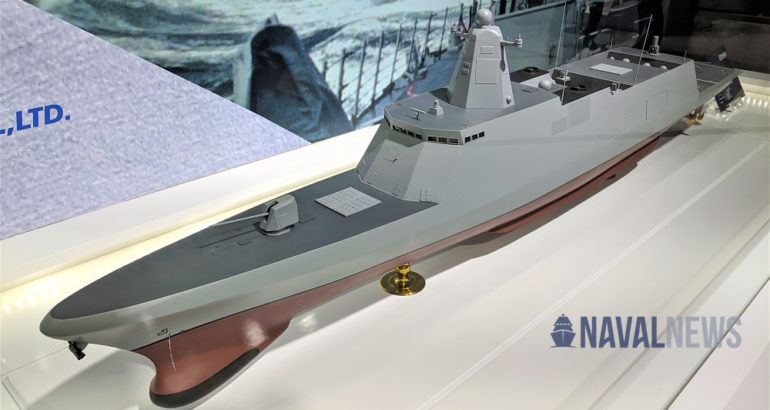 South Korean shipbuilder Daewoo Shipbuilding & Marine Engineering (DSME) completed the development of a new generation of electric propulsion system that could be fitted aboard the future KDDX destroyer and LPX-II LHD projects of the Republic of Korea Navy (ROK Navy).

DSME announced today that it completed a preliminary study to apply its new electric propulsion system technology to “next-generation high-tech vessels”. The Korea Electric Research Institute, Seoul National University and the Korean Register of Shipping also took part in this research project along side DSME.

The results of this electric propulsion system research are expected to dramatically improve the capability of anti-submarine warfare and high-power future weapons systems of the Republic of Korea Navy next-generation warship (KDDX) and large transport-II (LPX-II). Daewoo Shipbuilding & Marine Engineering, which had already carried out the conceptual design for the Republic of Korea Navy accelerated the development of this project.

In this research project:

DSME explains that the electric propulsion system provides survivability during anti-submarine warfare (ASW) operations because it operate solely with electricity, without a mechanical propulsion system, and therefore limit underwater radiated noise as much as possible. The system can also generate massive amounts of power, which is a growing need for future weapons systems, such as capacity-powered railgun systems that consume a great amount of electricity. DSME statement cites the U.S. Navy’s USS Zumwalt and Royal Navy’s HMS Queen Elizabeth as examples of vessels already benefiting form electrical propulsion systems.

“Daewoo Shipbuilding & Marine Engineering has a special performance research institute specializing in the development of new domestic naval technologies. We will develop our vessels through collaboration with industry-academia-research institutes to make them the world’s best smart ships, which will contribute to protecting the Republic of Korea Navy”

DSME and Korea Institute of Electrical Engineering also announced they have signed a mutual cooperation agreement to jointly develop a naval power system and develop core equipment and materials for this technology.

KDDX is a next generation destroyer program for the ROK Navy. Korea’s two main shipbuilder, Hyundai Heavy Industry (HHI) and DSME, are competing, each with their own design. DSME completed their conceptual design in 2019. South Korea’s Defense Acquisition Program Administration (DAPA) is expected to award the basic design contract to one of the two competed shipyards this year.

As previously explained (during our coverage of MADEX 2019), DSME has already signed a number of contracts with the ROK Navy in previous years:

SMART Navy is a new ROK Navy plan calling for “Strong Maritime forces Accomplished with Revolutionary Technology”. On the ROK Navy stand at MADEX 2019, a video about that SMART Navy plan was showing DSME’s KDDX trimaran design with a number of future systems linked to it (unmanned systems and future weapons):

In its baseline configuration, DSME’s KDDX has a length of 155 meters, a beam of 18 meters and a draft of 9.5 meters for a displacement of 8,000 tons. It features 48x VLS cells forward, 16x VLS cells aft, 16x anti-ship missiles and 2x K-DAGAIE NG decoy launchers.

As explained previously, LIG Nex1 and DSME are currently negotiating a partnership for the integration of LIG’s integrated mast (Hanwha being partnered with HHI). We were told during MADEX that this potential partnership will be non binding and that DSME remains open to work and integrate Hanwha’s I-MAST should the ROK Navy make this choice. LIG Nex1 is also developing a very advanced combat information center (CIC) for the KDDX.

To learn more about DSME’s KDDX design, check out our video coverage:

To learn more about LIG Nex1 advanced CIC and I-MAST proposals for KDDX, check out our video coverage: