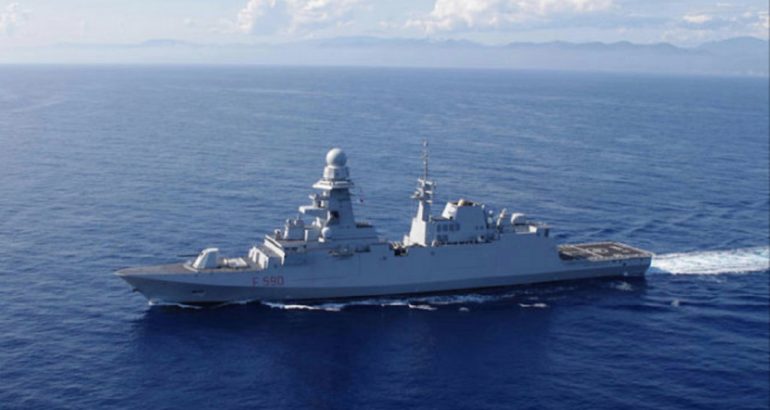 The Italian Navy (Marina Militare) FREMM Frigate "Carlo Bergamini" concluded its participation to the European anti-piracy operation Atalanta (EU NAVFOR), during which it carried out presence and surveillance tasks in the Gulf of Aden and the Indian Ocean.

Among the tasks of the mission, within the broader framework of Naval Diplomacy, the unit has helped to consolidate the collaborative relationships with the countries in the area and with local communities. In the next few days the Bergamini will return to Taranto.

Since February 15, Bergamini has operated continuously in the EU NAVFOR Somalia, contributing effectively to counter piracy in the area by patrolling the waters most at risk. It covered more than 14. 700 miles, for a total of 1740 hours of motion, over 140 hours of flight – of which 27 at night – of the two helicopters on board, 18 consensual visits (friendly approach/from the boat approach) to boats in Somali waters, 18 Intelligence, Surveillance and Reconnaissance data collection missions, 31 Surface Surveillance Control patrol missions, 33 days of patrol in Somali coastal waters and 23 interrogations to merchant ships and vessels. The ship also escorted the World Food Programme merchant ship “Juist” for two days.

Operation Atalanta, decided by the European Council in November 2008, is in fact the first European-led maritime military operation. The operation was launched to combat piracy in the Horn of Africa (Gulf of Aden and Somali Basin), which continues to pose a threat to the freedom of navigation of merchant shipping and, in particular, to the transport of humanitarian aid from the World Food Programme.

The mission involves naval units and aircraft located in the area for the surveillance and recognition of suspicious activities attributable to the phenomenon of piracy.

Luca Peruzzi 12 Oct 2021
Since the 1st of October Italian Navy Bergamini-class frigate ITS Federico Martinengo (F 596) is operating as the first national asset under the Operation AGENOR within the European-led Maritime Awareness in the Strait of Hormuz (EMASOH) initiative.