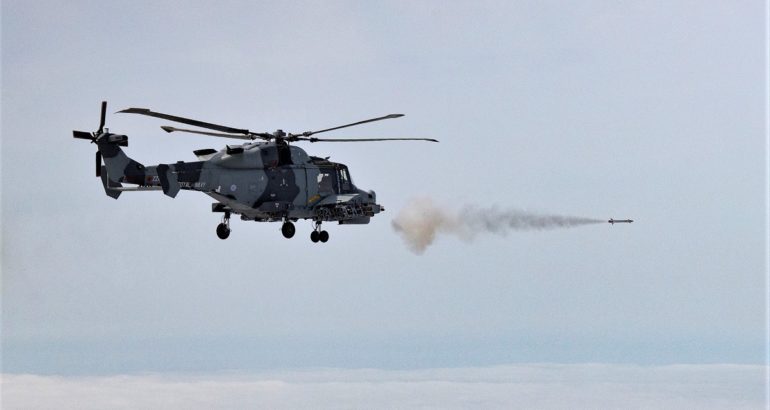 The trials mark an important milestone in the testing of the new system which will arm the Wildcat helicopters that deploy as part of HMS Queen Elizabeth’s maiden operational deployment next year. The LMM, which the Royal Navy will call Martlet when it enters service later this year, will provide an enhanced level of protection for both service personnel in the Royal Navy and vital assets at sea, such as the Queen Elizabeth Carrier.

“This test firing shows the Wildcat helicopter will be ready to help defend our Queen Elizabeth-class carriers and their strike groups for years to come. The Royal Navy and Army introduced Wildcat helicopters into service five years ago and the firing of the Martlet this week is a very significant milestone and represents a huge success for the joint industry and MoD team. This firing underpins future Royal Navy offensive capability and the defence of the surface fleet.”

Managed by the Lightweight and Medium Attack Systems and Wildcat delivery teams at DE&S, and manufactured by Thales, the laser-sensor missile can be used against stationary and moving targets.

Martlet, also known as the LMM, has already been successfully launched off frigate HMS Sutherland so the latest firing was to test it in its primary role.

When it enters service later this year, LMM will give the Wildcat increased protection capability able to address highly mobile maritime threats such as weaponised speed boats and jet skis.

“Martlet will ensure the Wildcat has the best-in-class offensive capability to protect the carrier strike group. With each helicopter capable of carrying up to 20 missiles, the Wildcats deployed will be a significant deterrent to anyone wishing to interfere with UK interests.”

“This major milestone demonstrates that the combination of the AW159 Wildcat and Martlet missile will be a flexible and effective tool for the Royal Navy. Next year the Wildcat fleet will embark on Carrier Strike Group missions with HMS Queen Elizabeth on its maiden operational deployment. As the only British company to design and manufacture helicopters on-shore, we’re extremely proud to be equipping the UK Armed Forces with world-beating sovereign capabilities.’”

According to Thales, LMM is a low cost, lightweight, precision strike, missile, which has been designed to be fired from tactical platforms including fixed or rotary winged UAV s and surface platforms. The system is designed to provide a rapid reaction to a wide range of the surface threats from wheeled or tracked vehicles, towed artillery or static installations; naval threats from small ships and fast inshore attack craft and an air threat from light aircraft.

• Immune to all known Countermeasures