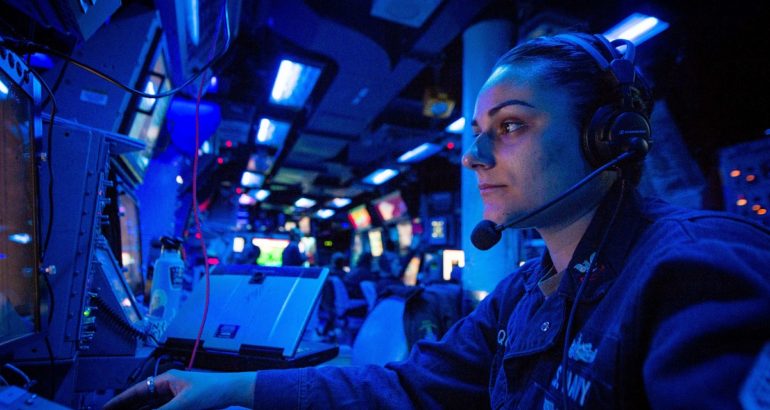 In January, the guided-missile cruiser USS Bunker Hill (CG 52) — part of the Theodore Roosevelt Carrier Strike Group — left San Diego for a scheduled Indo-Pacific deployment. Along with 6,000 service members spread between several ships is a new experimental unit designed by the Johns Hopkins Applied Physics Laboratory that could one day change the way the Navy plans for defeating anti-ship missile attacks.

The hard kill/soft kill (HK/SK) Performance Assessment Tool (HaSPAT) helps the warfighter understand the planned defensive posture and evaluate combat system performance before an enemy attack. It also balances weapon inventory by advising what’s available and keeping enough weapons back for individual defense measures. APL deployed HaSPAT on the Bunker Hill to get warfighter feedback that will be essential to developing new engagement coordination capabilities for the fleet.

SK sensors detect signatures from weapons and then use electromagnetic countermeasures to disrupt them. HK countermeasures include physical weapons, such as projectiles, to destroy or damage incoming fire.

The tool — developed and ready for deployment in less than six months — demonstrates the Laboratory’s ability to rapidly prototype sponsor solutions. APL engineers began working on it after a visit to the Bunker Hill in June 2019.

“During the visit, the commanding officer, Capt. Kurt Sellerberg, offered to evaluate hard kill/soft kill coordination tools if APL could provide them before the ship’s deployment in early 2020,”

It was a risky endeavor, Kochanski admitted, but one made possible with the use of internal Independent Research and Development funding.

“IRAD funding worked perfectly for this project because it gave our team the flexibility to balance prototype functionality intended for delivery with the tight schedule,”

“We made design choices with the understanding that our work was the starting point for establishing a force capability. We understood, going in, that continued feedback from USS Bunker Hill and additional warfighters would be needed.”

“This was very ambitious,”

“We had to brainstorm ideas, create a plan, and implement, test and evaluate [the prototype] within a confined and inflexible time frame.”

While the tool is meant primarily to be used by the warfighter, additional users could include analysts and engineers for data visualization, testing, evaluation, modeling and simulation.

“There is an operational need to coordinate the use of HK and SK measures, and that includes the combined planning,”

“A goal of the planner is to raise awareness of the capabilities of soft kill measures in the air-defense planning phase.”

Steven Leon, engineer on the project who is also in AMD.

The HaSPAT is a first step toward changing insights into the different ways for the warfighter to modify mission planning and increase survivability using HK and SK platforms.

“The tool incorporates information about weapon effectiveness to support weapon assignment and scheduling. The simulation produces analytics and performance metrics to inform the user of possible risks associated with battlespace configurations.”

Steven Leon, engineer on the project who is also in AMD.

It is also compact enough to be used as a stand-alone application with multiple tools on a single laptop, accessible through a modern user interface.

“The tool can be used for experimental and mission planning development studies,” “Performance measures regarding ship doctrine configurations can be studied and analyzed using our tool. These adjust weapon scheduling algorithms for improving survivability.”

As the USS Bunker Hill continues its deployment, the crew will examine the prototype’s functionality and give feedback for more updates. This increases the likelihood of combined HK and SK planning as an operational capability fleet-wide within the next decade.

“This is a stepping stone to a much more significant force layer capability. Our bold effort provided an opportunity for feedback regarding the continued development of HK and SK coordination capability,”

“This will go a long way in helping our Navy address current and future challenges.”