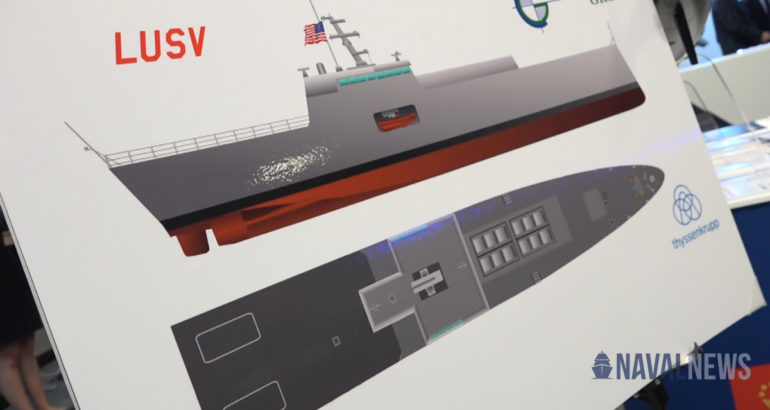 The purpose of this update is to release the official Request for Proposal N00024-21-R-5211 for Small Surface Combatant (SSC) Combat System (CS) Ship Integration and Test (SI&T).

The full (225 pages) RFP document is available at this link. Offers are due by 22 July.

The Large Unmanned Surface Vehicle (LUSV) United States Navy project set to begin construction in 2020. The LUSV will have the capacity for modular payloads such as anti-ship, anti-submarine or anti-air weapons and be designed to be affordable, high-endurance, reconfigurable ships based on existing hull forms. Capable of operating with human operators in the loop (and aboard for port maneuvers), the U.S. Navy envisions the LUSVs operating alongside fleets as scouts and magazine ships.

$209.2 million of funding for the initial two LUSVs, set to begin construction in 2020, was included in the 2020 Defense Appropriations Bill, with plans to buy eight more over the five-year projection known as the Future Years Defense Program.

During SNA 2020, the Surface Navy Association’s national symposium held earlier this year, Atlas North America (the U.S. branch of German company ATLAS ELEKTRONIK, owned by TKMS) and their partner The Columbia Group unveiled an LUSV design concept based on the MEKO A-100 hull form (picture above and at the top of the article) by TKMS. The MEKO A-100 is about 100 meters in length.

Back in August 2019, USNI News reported that the LUSV could be based on something similar to the NAVSEA-developed Iraqi 60-meter Offshore Support Vessel.

LCS lethality and survivability upgrades are set to give both LCS types new features to help the U.S. Navy outpace adversary threats.

Features like next generation electronic warfare capabilities via the Surface Electronic Warfare Improvement Program (SEWIP), an integrated shipboard combat system, over-the-horizon capability via the Naval Strike Missile (NSM) or Nulka, a rapid response active expendable decoy system that would give the LCS a more effective way to respond to anti-ship missiles and increase commonality across the fleet.