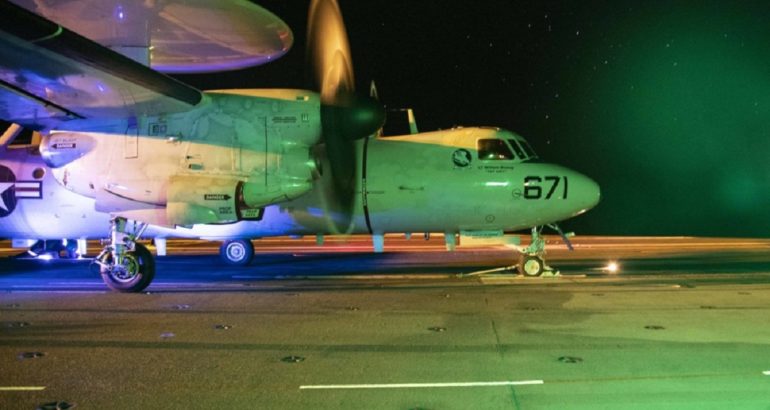 The U.S. Navy’s newest and most technologically-advanced aircraft carrier, USS Gerald R. Ford (CVN 78), contributed to another milestone for naval aviation during carrier qualifications (CQ) for the “Wallbangers” of Airborne Command and Control Squadron (VAW-117) May 12.

Ten VAW-117 pilots successfully completed CQ with assistance from the “Greyhawks” of VAW-120 in the operation of the E-2D Advanced Hawkeye. VAW-117 completed 151 catapults and 158 traps over the course of three days. The completion of the CQ prepares VAW-117 for the finalization of their transition between aircraft.

Lt. Cmdr. Jeremiah Caldwell, from Loudoun County, Virginia, a pilot assigned to VAW-117, explained some of the differences between the E-2C Hawkeye and the E-2D Advanced Hawkeye, and how his squadron is making the transition between aircraft.

“The E-2D is our latest and greatest aircraft that has a lot of good equipment and a really good radar that’s going to allow us to see our enemies at distances that we really haven’t seen before,”.

“The training process for us is about three years just to get to the fleet, so we are here aboard Ford training fleet aviators that are making the transition from the Charlie to the Delta.”

Lt. j.g. Nick Neighbors, from Johns Creek, Georgia, a junior pilot assigned to VAW-117, is one of the squadron’s newest pilots and said that he wanted to be a naval aviator since he was young and enjoys every aspect of his job.

“I got picked up for the E-2 community for my initial squadron,”.

“As I go through the pipeline and learn more and more about the aircraft, it’s a great crew to be a part of with a good mission, and it’s something that I really enjoy doing.”

With the completion of their CQ, VAW-117 is one step closer to being a fully-designated E-2D Advance Hawkeye squadron.

Lt. Cmdr. Justin Porter, from Crowley, Texas, a Naval Flight Officer assigned to VAW-117, said the success of the mission is not just attributed to the pilots who completed the CQ, but also the Ford Sailors who work on the flight deck.

“We’ve been surprised at the overall efficiency of CQ on the Ford, and because of that we are able to get our CQ done faster and get back to the west coast to finish the next steps for our squadron,”.

“This is a new ship, but the deck crew has been awesome getting us around the flight deck very efficiently.”

Ford is a first-in-class aircraft carrier and the first new carrier designed in more than 40 years. With more than 2,300 catapult launches and advanced arresting gear landings since commissioning, her tested and proven technology is delivering many improvements to the naval aviation enterprise.

VAW-117 will return to their home station, and begin training and integrating with their air wing for future missions and deployments. The squadron is on track to receive their “Safe for Flight” designation for the E-2D Advanced Hawkeye in July.