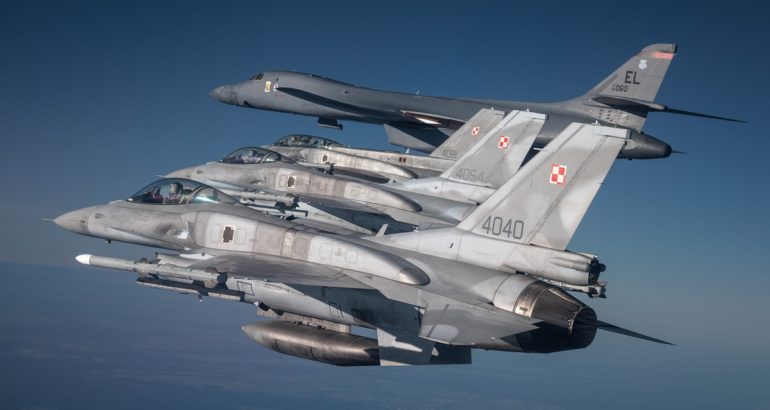 Polish F-16s and MiG-29s escort a B1B Lancer during a training mission for Bomber Task Force Europe, May 29, 2020. Aircrews from the 28th Bomb Wing at Ellsworth Air Force Base, South Dakota, took off on their long-range, long-duration Bomber Task Force mission to conduct interoperability training in the Black Sea region. Training with our NATO allies and theater partner nations contribute to enhanced resiliency and interoperability and enables us to build enduring relationships necessary to confront the broad range of global challenges. (Courtesy photo by Polish Air Force)

During the mission, the two B-1s conducted training on the Long Range Anti-ship Missile (LRASM). Designed to target adversary ships, the LRASM gives the B-1 the ability to have advanced stand-off and counter-ship capabilities.

The LRASM is a next generation weapon designed to detect and destroy specific targets within groups of surface warships in electronic warfare environments.

“LRASM plays a critical role in ensuring U.S. naval access to operate in both open-ocean and littoral environments due to its enhanced ability to discriminate between targets from long range. With the increase of maritime threats and their improvement of anti-access/area denial environmental weapons, this stealthy anti-ship cruise missile provides reduced risk to strike assets by penetrating and defeating sophisticated enemy air-defense systems.”

Albrecht also highlighted the fact that through training scenarios during Bomber Task Force Missions, B-1 aircrews are able to train to new emerging threats. Training for those threats is adequately preparing them to be ready to answer National Defense Strategy objectives.

“The rise of near-peer competitors and increased tensions between NATO and our adversaries has brought anti-ship capability back to the forefront of the anti-surface warfare mission for bomber crews,” said Albrecht.

In addition to enhancing the training of bomber crews, the ability for the U.S. Air Force to train to this weapon system also increases our deterrent capability.

According to Albrecht, this training adds deterrent value not only to the U.S. but to our allies and partners. He says that in the future adversaries will not only have to worry about missile threats from surface ships, but land-based bombers as well. These capabilities should weigh heavily on any potential adversaries mind and they should account for them in their decision calculus. Bombers equipped with LRASM should give adversaries pause and deter aggressive actions by would-be adversaries who seek to do harm to the U.S. and its allies and partners.

In 2018, Air Force Global Strike Command authorized Ellsworth as the early operational capacity basing location for the AGM-158C LRASM. This authorization made Ellsworth and the B-1 bombers the first base and airframe to train and qualify on the LRASM.

This mission follows another USAF B-1B long range mission which also involved the LRASM, two weeks ago, in the Pacific.

The AGM-158C LRASM achieved early operational capability with the U.S Air Force B-1B in December 2018, ahead of schedule. A single USAF B-1B Lancer can carry and deploy up to 24 LRASM.

The Russian Ministry of Defense issues a statement and illustration about the mission:

“The activity of the US Air Force and Navy and their allies near the borders of the Russian Federation sharply increased. In April, the B-1B strategic bombers flew along Kamchatka, and in May five such flights were recorded. On May 29 the B-1B first appeared over Ukraine. In all cases, our air defense systems detected the B-1B in a timely manner, established continuous monitoring and prevented incidents. 7 launches of fighters on air defense duty were completed. Anti-aircraft missile systems were in readiness for immediate use.” 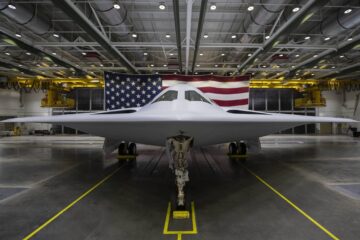 Peter Ong 24 Dec 2022
Naval News reached out to RAND corporation to get their insights on how the U.S. Air Force’s new B-21 Raider stealth heavy bomber can operate with the U.S. Navy in a maritime role...