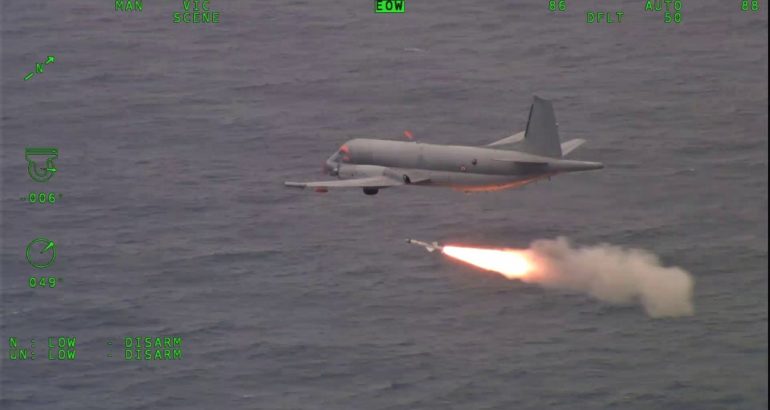 The information was announced by Admiral Prazuck, the French Navy’s chief of staff, on Twitter. Admiral Prazuck added that the AM39 launch was preceded, the same week, by the launch of a laser guided bomb:

Thanks to its CEPA / 10S test crew, the Atlantique 2 standard 6 reaches a new stage with the success, in the same week, of a launch of a laser guided bomb and a live AM39 anti-ship missile. In many areas of warfare this aircraft will be a game-changer!

The AM39 was a “live” missile as mentionned by the admiral and as shown on the pictures: It features a yellow stripe on its body. Blue stripes are indicative of an inert or training round according to NATO rules. A yellow stripe means that the missile is combat ready. In other words it is fitted with its warhead.

For the record, most missiles tests are conducted without warheads for security reasons. The missile still flies to its designated target, typically hitting the target, but it doesn’t detonate.

Exocet AM39 is the airborne version of the Exocet anti-ship missile family. It can be launched from strike aircraft, Maritime Patrol Aircraft and helicopters. According to MBDA, with a range of up to 70 km, depending on the altitude and speed of the aircraft, the Exocet AM39 enables the aircraft to remain at range from enemy air defences. When carrying out a low altitude attack, the missile may also be launched under the target ship radar coverage. Ingress is at a very low altitude over the sea (sea skimming).

The Exocet AM39 Anti-ship missile is in service with the French armed forces and the navies of 11 other countries. Development of the latest variant, known as Exocet AM39 Block 2 Mod2, started in 2004, alongside the Exocet MM40 Block 3 (surface launched variant).

In June 2007, the latest Mod2 development of the Exocet AM39 Block 2 completed its final validation firing from a Rafale M F3 combat aircraft. The firing also served as the validation firing for the Rafale in its F3 standard. The Mod2 evolution brings digitisation to the Exocet AM39 missile. A further upgrade could bring the AM39 to the Block 3 or Block2 Mod3 standard: The coherent seeker from the new MM40 Block 3C

The third Atlantique 2 (ATL2) maritime patrol aircraft (MPA) upgraded by Dassault Aviation, Thales and Naval Group was delivered in April this year. A total of 18 ATL2 are set to be upgraded to “standard 6”.