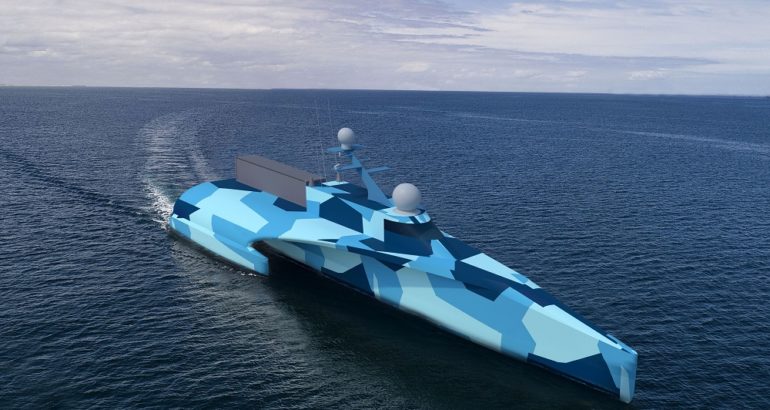 Two existing commercial fast supply vessels were converted into USVs for Overlord testing. The Overlord program, developed by the Office of the Secretary of Defense Strategic Capabilities Office (OSD SCO) in partnership with Program Executive Office Unmanned and Small Combatants (PEO USC), are playing a vital role in informing the U.S. Navy’s new classes of USVs.

The program consists in two phases:

Phase I, which concluded in September 2019, converted two existing commercial fast supply vessels into USVs and focused on autonomy system integration; demonstration of navigational autonomy; and hull, mechanical and electrical system reliability upgrades. Both Overlord vessels executed interactions compliant with the Convention on the International Regulations for Preventing Collisions at Sea (COLREGS). Along with reliability of systems tests, more than 600 hours of autonomy testing was successfully completed during Phase I, including several long-range autonomous transits in a complex navigational environment.

Phase II is being conducted using the same ships from Phase I and focuses on the integration of government-furnished command-and-control systems and payloads and involve more complex and challenging naval experimentation. Phase II will complete in Fiscal Year 2021 at which point the Overlord vessels will transition to the U.S. Navy for further experimentation.

The experiences gleaned from both Phase I and II of Overlord are designed to inform and accelerate the U.S. Navy’s Large and Medium USV programs, which are managed by the same team in PEO USC.

The MUSV will be a pier-launched, self-deploying modular, open architecture surface vehicle capable of autonomous navigation and mission execution with deck space for two standard ISO containers (one 40 feet and one 20 feet).

The Large Unmanned Surface Vehicle (LUSV) United States Navy project is set to begin construction in 2020. The LUSV will have the capacity for modular payloads such as anti-ship, anti-submarine or anti-air weapons and be designed to be affordable, high-endurance, reconfigurable ships based on existing hull forms. Capable of operating with human operators in the loop (and aboard for port maneuvers), the U.S. Navy envisions the LUSVs operating alongside fleets as scouts and magazine ships.

$209.2 million of funding for the initial two LUSVs, set to begin construction in 2020, was included in the 2020 Defense Appropriations Bill, with plans to buy eight more over the five-year projection known as the Future Years Defense Program.