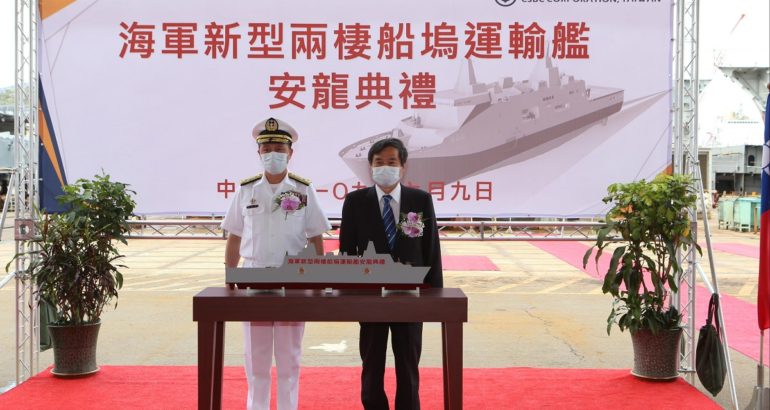 Taiwan’s naval shipbuilder China Shipbuilding Corporation (CSBC) held a keel laying ceremony for the country's first ever indigenous landing platform dock (LPD) on June 9, 2020. The 10,000 tons amphibious vessel is set to be delivered to the Republic of China Navy (ROC or Taiwan Navy) in April 2022.

Admiral Liu Zhibin, Commander of the ROC Navy, and CSBC’s Chairman Zheng Wenlong co-chaired the keel laying ceremony. CSBC received a contract (valued at 4.6 billion Taiwan Dollars) for the vessel, which has been ordered to fulfil the ROC Navy amphibious assault requirements, in April 2018. Its construction (first steel cut and assembly of first two blocks) apparently started as early as 2019. A total of two units are expected to be produced as part of the “Hongyun Project” for a cost of NT$ 18 billion.

According to CSBC, the new Landing Platform Dock (LPD) is an important naval shipbuilding project, and is part of the government’s policy of “national shipbuilding.” The ship has a total length of 153 meters, an overall beam of 23 meters, a hull draught of 6 meters and a full-load displacement of 10,600 tons. The main task of the vessel will be amphibious operations: Serve as the main unit in an amphibious task force to carry out amphibious combat missions or perform recovery operations on Taiwan’s outer (offshore) islands, and serve as a maritime mobile field hospital. Secondary roles include disaster relief (the vessel can serve as a temporary field hospital) and international humanitarian relief.

According to Taiwan’s Ministry of National Defense:

As we reported previously, the design of Taiwan’s LPD was unveiled at TADTE 2019. CSBC’s LPD features a modern design, with two enclosed masts which appear similar in concept to the Advanced Enclosed Mast/Sensors (AEM/S) found aboard the San Antonio-class (LPD 17) of the U.S. Navy.

The scale model shows a 76mm main gun at the bow, two PHALANX CIWS (one forward, one aft on top the hangar) and probably the most unique feature for this future class of ship (and likely a first for an amphibious transport dock): 2×4 missile launchers amidship, likely for 2×8 TC-2N SAM and 2×2 Hsiung Feng II or III anti-ship missiles.

The design, based on the sale model, also features a large helicopter deck, two hangar doors, two shaft lines and of course a well deck.

While these four ships will likely be replacing the two outdated Newport-class LST (ROCS Chung Ho and ROCS Chung Ping) and the single Anchore-class LSD (ROCS Hsu Hai), they will represent a huge capability increase.