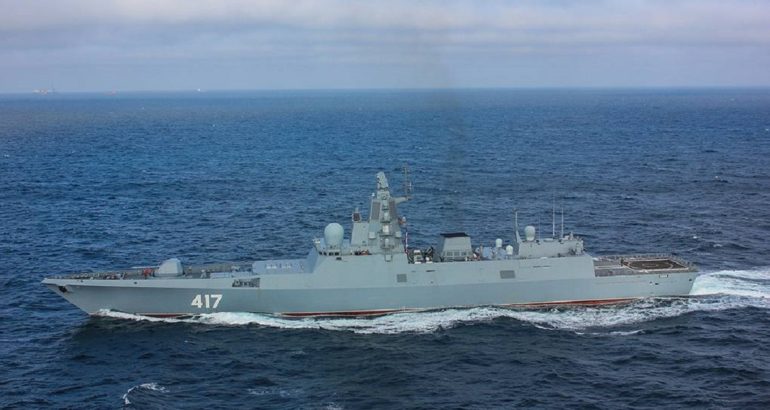 Three Admiral Gorshkov-class frigates (Project 22350 ) will join the Pacific fleet of the Russian Navy. The Admiral Amelko will be the first one.

The frigates will create a powerful modern force in the region and will carry Tsirkon hypersonic missiles in the future. No other navy in the world is armed with such weapons, the Izvestia daily writes.

Defense Ministry sources said the decision in principle to deploy project 22350 frigates in the Pacific Ocean had been made. The Admiral Amelko is likely to join the Pacific fleet in 2023. Two other frigates are to arrive by 2025, the sources said.

A total of eight frigates are to be produced. The Pacific and the Northern fleets will get three each and the Black Sea fleet will receive two.

The Navy currently operates one frigate — the Admiral Gorshkov. The Admiral Kasatonov is to join the Navy by the end of the year. The Admiral Amelko and the Admiral Isakov are to follow in the coming two years.

The Admiral Amelko was laid together with the Admiral Chichagov in the spring of 2019. The construction of two other frigates is to begin in 2020, however they have not been laid so far and have not been officially named.

“The fleet has to send warships at least twice a year to long sorties. It also has to maintain international presence at Somali coast. Warships periodically sail to Southeast Asia to participate in joint exercises with Vietnam and Singapore,”

The latest frigates are excellently fit for the demonstration of the Russian flag in Southeast Asia and outside it.

“Pacific fleet warships regularly sail to the Pacific and Indian Oceans and sometimes to the Mediterranean Sea. Frigates of project 22350 are fit for the missions as they are modern warships with powerful arms. Their presence in remote areas of the planet will demonstrate the capabilities of the Russian Navy. They are reliable and seaworthy ships. The Admiral Gorshkov frigate led a group of ships on a round-the-world voyage which covered over 40 thousand nautical miles without major breakdowns,”

Project 22350 frigates will create modern attack groups in the Northern and Pacific fleets. Each will comprise three frigates. The Navy has always concentrated major forces in the strategic directions. The fleets were always superior to the Black Sea and Baltic fleets and had to repel aircraft-carrying forces of the adversary, Boltenkov said.

The frigates can engage in a broad range of green-water missions. They defend vessels, communications, engage in counterterrorist and peacekeeping operations, provide air defense to other warships, support amphibious assault, and strike at various ground and sea targets.

The new frigates are made with stealth technologies. Modern composite materials are used to minimize the signature. The warships have a new hull and superstructure architecture. All the measures decreased the radar signature.

The frigates are the most powerful in the Russian Navy. The universal vertical 3S-14 launchers fire Kalibr cruise missiles, Onix antiship missiles and hypersonic Tsirkon.

The second four frigates will be built by an upgraded project with reinforced weapons. They will be armed with 24 instead of 16-cell missile launchers. The Admiral Amelko is the first frigate with upgraded arms.

The frigates are testing new arms. In January 2020, the Admiral Gorshkov test fired a Tsirkon missile from the Barents Sea which hit a ground target in Northern Urals. It thus became the first warship to launch the hypersonic missile, the Izvestia said.