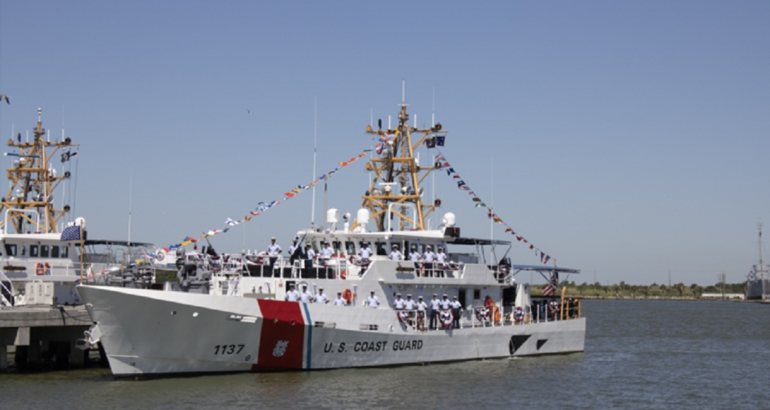 The U.S. Coast Guard commissioned the 37th fast response cutter (FRC), Edgar Culbertson, in Galveston, Texas, June 11. The cutter is the second of three FRCs to be stationed in Galveston.

In line with current social distancing requirements, the in-person ceremony – presided over by Rear Adm. John Nadeau, Eighth District commander – was limited to the official party, Culbertson family and family of the crew. Those unable to attend in person were able to watch the ceremony live on the U.S. Coast Guard Heartland Facebook page.

Petty Officer 1st Class Edgar Culbertson, the cutter’s namesake, lost his life in an effort to save three drowning teenage brothers in Duluth, Minnesota, in April 1967. Culbertson and two other Coast Guard members tethered themselves together with rope in an attempt to rescue the brothers, but Culbertson was swept off the pier. For their bravery, the three service members were awarded the Coast Guard medal, the Coast Guard’s highest level of recognition for heroic and selfless acts that do not involve direct conflict with an enemy.

The Coast Guard has ordered 56 FRCs to date. Thirty-seven are in service: 12 in Florida; seven in Puerto Rico; four in California; three each in Hawaii and New Jersey; two each in Alaska, Mississippi, North Carolina and Texas. Future FRC homeports include Santa Rita, Guam; Astoria, Oregon; and Kodiak, Seward and Sitka, Alaska.