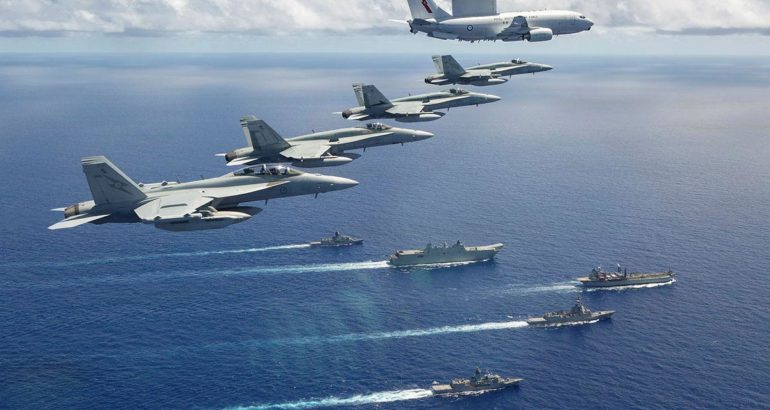 A formation from the Royal Australian Air Force of an E-7A Wedgetail from No. 2 Squadron, three F/A-18A Hornets from No.77 Squadron and an EA-18G Growler from No. 6 Squadron fly over a Royal Australian Navy task group of HMA Ships Canberra, Hobart, Stuart, Arunta and Sirius during the Regional Presence Deployment in July 2020.

Royal Australian Air Force (RAAF) and Royal Australian Navy (RAN) units and personnel have deployed to take part in a series of large scale training exercises in the Pacific region.

Royal Australian Air Force (RAAF) aircraft and more than 150 RAAF personnel have deployed to Guam to join exercises with the Royal Australian Navy and the United States.

HMAS Canberra, Hobart, Stuart, Arunta and Sirius are part of a Joint Task Group conducting a regional deployment through Southeast Asia, before participating in exercise RIMPAC in Hawaii.

Minister for Defence, Senator the Hon Linda Reynolds CSC said training of air and sea forces is an important progression in the joint force capability.

“Some of our most advanced capabilities including the EA-18G Growler and the Guided Missile Destroyer, HMAS Hobart, will be able to integrate in a combined air and sea environment. Exercising as a joint force across air and sea allows the Navy and Air Force to understand each other’s warfighting activities, to fight better in the maritime environment, make decisions quickly and fully employ their forces across multiple domains”.

The transit to RIMPAC provides the RAN an opportunity to practice joint warfare.

Training will include an E-7A Wedgetail aircraft working alongside the maritime elements, to generate an overall air and sea picture.

They will also conduct maritime air defence and air combat exercises with US Air Force partners and the Australian Joint Task Group.

The deployed Australian forces will also increase interoperability by training with the US forces in the region. 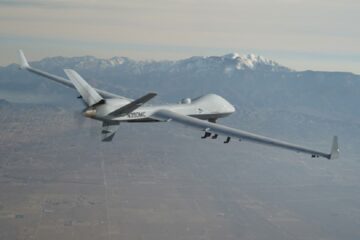