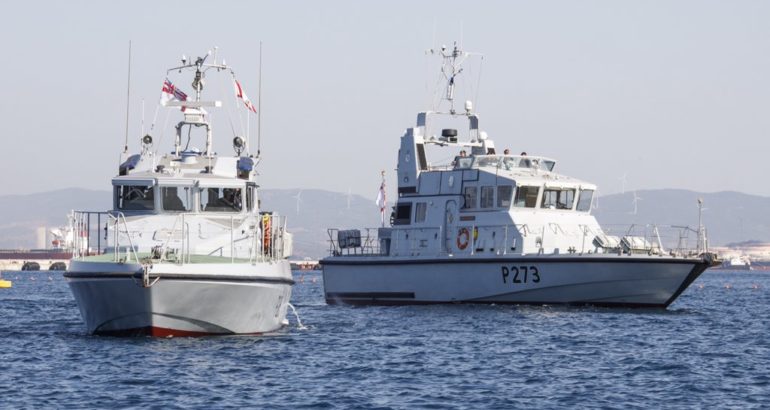 The two new boats will replace the Gibraltar Squadron Fast Patrol Craft, HMS Pursuer and Dasher. These two Archer-class vessels very recently took over from HMS SABRE and HMS SCIMITAR, the Scimitar Class vessels that had been in service in Gibraltar for 17 years. Royal Navy picture.

The remainder of the contract will provide an additional four years of local In-Service Support to the patrol craft.

Both boats will be used to patrol HMNB Gibraltar and British Gibraltar Territorial Waters (BGTW) as well as supporting British exercises and operations in the area, keeping a close watch over Gibraltar’s shores.

There has been a British Armed Forces presence in Gibraltar for more than a hundred years and these boats will ensure we maintain an important capability to the Royal Navy and our armed forces, as well as playing a pivotal role in patrolling our coastline, protecting domestic waters and supporting maritime interests. These boats will provide the Royal Navy Gibraltar Squadron with a modern, fast and effective capability for fulfilling their important role.”

The two new boats will replace the Gibraltar Squadron Fast Patrol Craft, HMS Pursuer and Dasher. These two Archer-class vessels very recently took over from HMS SABRE and HMS SCIMITAR, the Scimitar Class vessels that had been in service in Gibraltar for 17 years.

Putting technological advancement at the fore, the vessels will demonstrate UK  sovereignty of Gibraltar as well as providing force protection to designated visiting UK and Allied military vessels.

“These new vessels will enable the Royal Navy to maintain the security of British Gibraltar Territorial Waters and protect British, NATO and Allied ships transiting through the region. This contract will also support highly skilled jobs across the UK which clearly demonstrates how national security and regional prosperity go hand in hand.”

The vessels are being built at MST’s boatyard on Merseyside and has created 25 new jobs as well as sustaining 30 current jobs as part of the £9.9M contract.

“We are very proud to be working with DE&S helping to deliver tomorrows technology and ensure our UK Armed Forces are at the cutting edge of capability. This contract is particularly prestigious and reflects just how far Marine Specialised Technology has come in the last eighteen years and is a commendation for all of the hard work and dedication that our team has put in.”