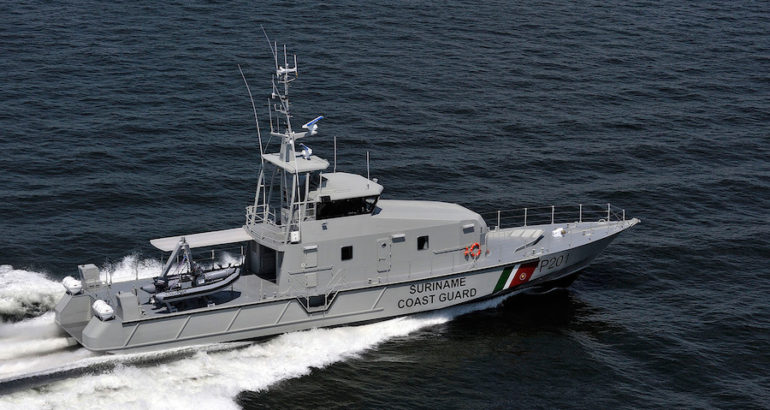 The State Border Guard Service of Ukraine (SBGSU) inked a contract with French company OCEA for the procurement of 20 patrol boats on July 22.

On behalf of the SBGSU, the contract was signed by the Head of the Service Serhii Deyneko, on behalf of OCEA – by the Chief Executive Officer Roland Joassard.

Commenting on the signing of the deal, Prime Minister Denys Shmyhal named the agreement a successful example of support for the national producer.

“The key point is it’s not just buying something abroad. This is a strategic order, as five boats should be produced at the facilities of a Ukrainian shipbuilding company… As a result, we will get not only the workload for the company, which actually means work for hundreds of people but also experience and technology in manufacturing ships of this class,”

The Minister of Internal Affairs Arsen Avakov noted the special conditions of financing the project, as the Treasury of the French Republic is involved in lending, thereby making it possible to supply 20 patrol boats for border guards in three years.

“As part of this project, apart from receiving new modern boats to protect the state border, Ukraine will also acquire modern technologies in building crafts. In the future, this will allow us to independently conduct technical maintenance of our ships at Ukrainian enterprises and develop our domestic production,”

For the record, Ukrainian and French governments were negotiating for the joint production of 20 FPB 98 patrol boats designed by the OCEA shipyard in June 2019. The Government of Ukraine finally gave its green light for the procurement of the patrol vessels in November that year. It was announced last month that local shipyard Nibulon Shipbuilding has been selected to build five of the patrol vessels.

The contract value is € 136.5 million. It includes « partial financing from loans from both commercial banks and from the Treasury loan of the Ministry of Finance of France. The loan is provided by the state of France. Ukraine will 15% from the budget, while the remaining 85% will be provided by the loan, » explained the Ukrainian Minister of Internal Affairs. France offered a comprehensive approach to credit financing and agreed to localize 25% of the production in Ukraine.

OCEA’s 32 meters-long FPB 98 patrol vessel has a crew complement of 13 sailors and features a maximum speed of 30 knots.