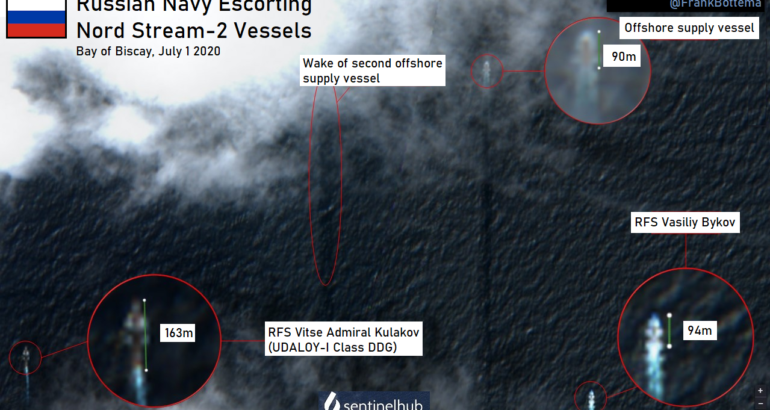 Russia’s controversial Nord Stream 2 gas pipeline is enjoying a naval escort. The undersea pipeline will be built in the Baltic between Russia and Germany. Two offshore supply vessels involved in the project are currently being escorted. They are accompanied by a Project 1155 Udaloy-I Class destroyer and a Project 22160 patrol ship. At the time of writing the ships are currently 40 nautical miles southwest of Brest, France.

Open Source Intelligence (OSINT) analyst Frank Bottema (Twitter) spotted the vessels in a Sentinel satellite image from Yesterday. They are just visible through a gap in the cloud. The vessels’s progress can also be tracked on other forms of OSINT.

The pipeline is controversial because it may provide Russia with a means to exert political influence on Europe. This is because it will bypass Eastern European countries. It might therefore make it possible for Russia to throttle gas supplies to Eastern European nations. This would be without affecting supplies to Western Europe which would be politically and economically more risky. Countries in the cross hairs could be Poland, Ukraine, Slovakia, Czech Republic or Belarus.

Some Baltic states are also concerned that the pipeline gives the Russian Navy an excuse to operate in their economic zones. This could provide them with the opportunity to gather intelligence and normalize a stronger military presence.