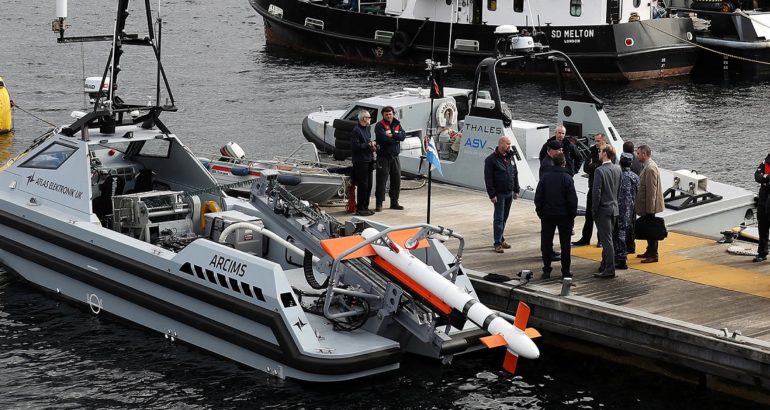 UK MoD Seeking UUV for Mine Warfare Missions from USV

According to a pre-contract information notice (PIN) issued on June 26, the UK MoD is seeking to procure three Unmanned Underwater Vehicles (UUV) to conduct mine warfare missions from Unmanned Surface Vehicles (USV). for the Mine and Hydrographic Capability (MHC) program.

According to the PIN, the UK MoD Mine and Hydrographic Capability (MHC) Team’s requirement would be for the contractor to provide « three sets of several Unmanned Underwater Vehicles (UUV) » along with a Launch and Recovery System (LARS), a command and control (C2) system, and different payloads such as Special Tool and Test Equipment. This procurement aims at conducting mine countermeasures operations from a « 11 meters motorboat in various environments ».

The UK MoD issued a first procurement timeline, which will begin in August/September with a prequalification questionnaire (PQQ), followed in November/December by an invitation to tender (ITT) process. A contract award is expected around the end of April 2021.

For the record, two types of 11 meters USVs are currently being tested by the Royal Navy MASTT trials and development unit (MASTT = Maritime Autonomous Systems Training and Trials): The Halcyon by Thales (and L3 Harris) and the ARCIMS by Atlas Elektronik UK.

In 2012, UK and France initiated the Maritime Mine Counter Measures (MMCM) programme which aims at developing a prototype autonomous system for detection and neutralisation of sea mines and underwater improvised explosive devices (UWIEDs). Managed by the OCCAR European agency, the MMCM contract was awarded to Thales, in collaboration with BAE Systems and their partners in France (ECA) and in the UK (ASV, Wood & Douglas, SAAB).

MMCM is a complete mine warfare system, composed of Unmanned Surface Vehicle (USV) and Underwater Unmanned Vehicles (UUVs), aiming at replacing French Marine Nationale and UK Royal Navy current fleets of Tripartite-class mine hunters. As part of the MMCM programme, Thales and BAE Systems are committed to providing systems to both the French Navy and Royal Navy for two years of evaluation testing, under the SLAM-F and MHC programs respectively.