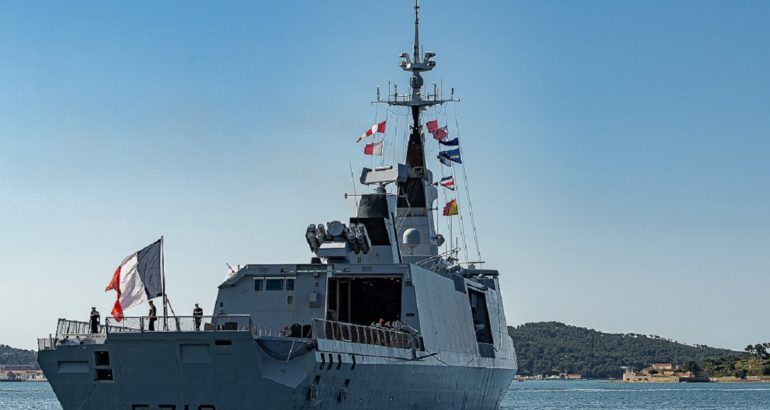 France announced Wednesday July 1st that it is suspending its involvement in NATO operation Sea Guardian following tensions with Turkey.

The move follows an incident which took place off the Libyan coast on June 10 between French Navy (Marine Nationale) La Fayette-class Frigate Courbet and Turkish Navy (Türk Deniz Kuvvetleri) vessels (including allegedly Barbaros-class frigate TCG Oruçreis). The Courbet was then taking part in Operation Sea Guardian, having departed Toulon Naval base on 28 May, according to a NATO press release.

The incident happened in a context of strong political tensions between France and Turkey, in particular over Libya.

France says the Courbet was targeted three times by the Turkish vessel’s fire control radars, which is an hostile act. The French frigate was trying to approach a Tanzanian-flagged civilian ship suspected of involvement in arms trafficking with Libya. The cargo ship was under the escort of three Turkish vessels. Turkey denied harassing the Courbet.

During an hearing at the EU’s Security and Defense Subcommittee on July 2nd, French minister of the armed forces, Florence Parly said:

I would like to pause for a moment on the very worrying behavior of Turkey. France and Turkey are both participating in the NATO Sea Guardian maritime security operation in the eastern Mediterranean, of which one of the missions is to provide maritime surveillance against trafficking.

This came after the United Nations imposed an embargo on arms supplies to Libya. Fifteen days ago, when a French ship was controlling a suspicious cargo ship from Turkey, Turkish frigates interfered and one of them, as we say in military language, illuminated the French ship with its fire control radar. It is an aggressive and unworthy act for a NATO ally.

I then pointed that very clearly at the last NATO ministerial meeting. I have been supported by many of my European counterparts and I thank them. We are supposed to be an alliance. An ally who conscientiously violates the rules that the Alliance is supposed to enforce and tries to threaten those who interrogate him is not acceptable. We therefore made four requests to prevent this type of incident from happening again:

Pending clarification on these various points, the President of the French Republic has decided to withdraw the French resources devoted to Sea Guardian until further notice.

A similar incident has been reported by the Hellenic Navy when one of its helicopter tried to land a VBSS team aboard another cargo vessel off Libya, but was warned by radio message that the vessel was under protection of the Turkish Republic. CNN Greece, which first reported the incident, said the Hellenic frigate was the Spetsai and the cargo vessel was Tanzanian-flagged Cirkin. The Spetsai was not part of NATO operation Sea Guardian but was under the command of European operation IRINI, which was set up by the European Union in February to stop arms imports to Libya in accordance with the UN weapons embargo.

Operation Sea Guardian is a non-Article 5 Maritime Security Operation, working with Mediterranean stakeholders to deter and counter terrorism, project stability and mitigate the risk of other threats to security for NATO Allies and partners in the Mediterranean Sea and its surrounding area. OSG has three core missions: maritime situational awareness, counter-terrorism and capacity building.