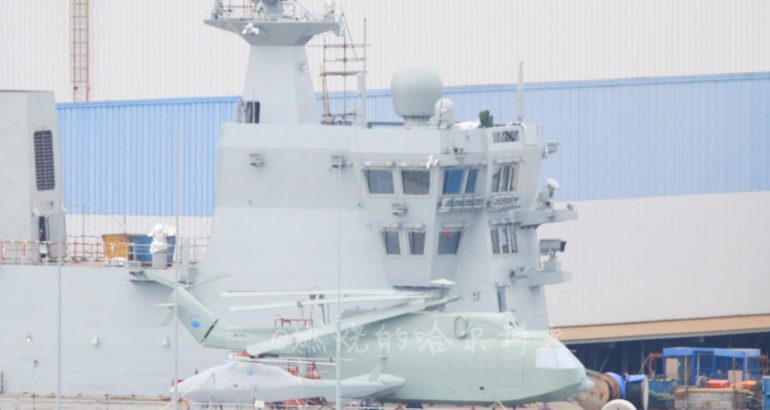 Photo Via @摇篮里的航海家 from Weibo

Was a VTOL UAV Spotted Aboard China’s Type 075 LHD ?

A new type of vertical take off and landing (VTOL) unmanned aerial vehicle (UAV) was allegedly spotted last week aboard one of the two Type 075 LHD currently fitting out in China. Henri Kenhmann from East Pendulum has the story.

What if Type 075 LHDs, the new vectors of the People’s Liberation Army Navy (PLAN or Chinese Navy)’s amphibious forces, were designed from the beginning to operate with unmanned systems ?

Following the integration tests of the Austrian Camcopter S-100 on the Type 054A anti-submarine frigates, photographed at least twice in June 2011 and then in May 2012 by the Japanese maritime self-defense force (JMSDF), and the tests in 2016 of a fixed-wing Wind Shadow, by Chinese manufacturer AVIC, on the electromagnetic catapult at the naval pilot training center in Xincheng, there is no doubt that the PLAN has been looking for some time to equip its ships with UAVs.

But it is neither on a frigate, nor on an aircraft carrier with skijump (and yet studies are underway), that the first UAVs of the Chinese navy will be operational, at least if we believe the photos recently taken by a netizen in Shanghai.

Launched on September 25, 2019 at the Hudong-Zhonghua shipyard, the fitting out of the first ship in class Type 075 is progressing rapidly, despite the fire incident which started in its well deck in April this year.

And as with all Chinese warships under construction, especially those with a deck and / or hangar, embarking full-scale models to test the aviation facilities of said warship is an integral part of factory testing before delivery.

While we are used to seeing models of helicopters and carrier-borne fighter aircraft such as the Z-8J, Z-9D and J-15 on surface vessels and aircraft carriers, or more recently Z-20 models aboard the stretched Type 052D and Type 055 destroyers, the appearance of what strongly resembles a VTOL UAV, with rotary wing, is rather new.

Indeed, on the deck of this first Type 075 we can clearly distinguish, next to a model of Z-8J helicopter, the silhouette of a UAV with angular shapes, with what seems tail and main rotors. Based on the well-known size of the Z-8J, we can extrapolate and estimate that the device in question would measure about 9.55 meters in length (some speak of 8.23 ​​meters) and would be more than 2.5 meters tall. Meaning a little smaller than a Z-9 (MTOW of 4,100 kg) or smaller than a Z-11 (MTOW of 2,250 kg).

As no light military helicopter program smaller than the Z-11 is known today (except probably the EC120 Colibri used by the aviation school of the Chinese army) we can then suppose that the new device is in fact a drone, a VTOL UAV which size exceeds practically all the projects made public so far.

If the hypothesis of the VTOL UAV is proven, the question to know what is the model and the manufacturer of this craft, which measures nearly 10 meters long and which could weight at least 1,200 kg at takeoff, remains unanswered.

Today, there are several Chinese entities capable of designing, or who already have work in progress, in terms of naval VTOL UAVs. We can cite for example a few national institutions such as the 601 Chengdu Institute and the 602 CHRDI Institute of the AVIC group, the aerospace groups CASC and CASIC, the specialist in target drones NRIST, the Chinese Academy of Sciences as well as several aeronautics universities, or even the private sector such as ZHZ Tech, Ziyan UAV, Sunward Technology…

NRIST, better known as the Institute 60 of the Chinese General Staff, made a good start in the matter at the 5th UAV Show China in September 2014, by presenting several rotary wing UAVs specially designed to be embarked on surface vessels. One of these drones exposed in the form of a model, the WZ-6B, weighs 1,600 kg at takeoff and has an endurance of 8 flight hours.

But while the take-off weight could correspond in the case of the WZ-6B, the shape of the airframe clearly diverges from the craft spotted on the Type 075 LHD. On the other hand, the physical appearance of the drone on the Chinese amphibious vessel is close to that of the AR-500C, an unmanned helicopter developed by the 602 CHRDI Institute of the AVIC group, which made its first flight on May 20 this year.

Although the physical resemblance can never be a tangible proof of the kinship of industrial projects, this gave a reason to look for what this R&D office of AVIC achieved in terms of naval UAVs. The company specializes in the design of helicopters and has already designed several unmanned helicopters like the famous AV-500W.

And we just learned that the CHRDI won an important tender from the Chinese navy, on September 8, 2016, on the development of a drone. The project is described as having “historic significance in the development of naval equipment for China” (该 项目 非同凡响 ， 对于 促进 我国 海军 武器 装备 发展 具有 划时代 意义。).

Few details are disclosed on the invitation to tender and the project, but an in-depth search in the articles published between 2015 and 2018 still allows us to extract several interesting points:

It is still premature to confirm with certainty that the device spotted on the first Type 075 LHD is indeed an unmanned helicopter, and that it is the one developed by CHRDI.

But while waiting for new open sources elements, it will be useful to focus on scenarios for the use of a VTOL UAV in the Chinese navy. Because 10 years after their first qualification tests, the operational deployment of UAVs on Chinese warships is just a matter of time.