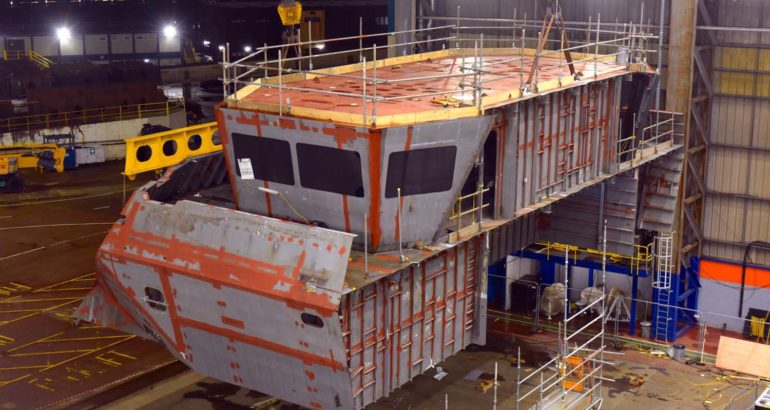 Construction has begun on the 57th segment of the 8,000-tonne jigsaw which is HMS Glasgow, the first of eight Type 26 frigates for the Royal Navy.

It’s almost two years to the day that work on Glasgow began in the yard on the Clyde, with many of the completed sections pieced together in one of BAE’s assembly halls.

Work began on this last section of ship as another £100m of contracts were placed with the vast supply chain needed to build the world’s most advanced submarine hunter.

Firms in Glasgow, Hartlepool, Nottingham and Dorset will provide a range of services and assistance with the construction of the class, including painting, cabling and insulation – work all essential to the outfitting of the ships – and the eventual float off when a barge lowers the frigates in the Clyde.

“It’s fantastic to see HMS Glasgow taking shape at our facilities here on the Clyde. She is a source of great pride for our workforce who have worked with real energy, commitment and innovation in recent months.”

To date more than £1bn has been spent in the Type 26 supply chain, spread around in excess of 100 firms worldwide. The latest £100m investment will support around 250 jobs in the UK, raising the total workforce involved in the future frigate programme over the 4,000 mark.

The eight ships, each named after some of the UK’s greatest cities, will replace the eight ‘souped up’ dedicated anti-submarine Type 23 frigates which will reach the end of their active lives by the mid 2030s.

In addition five Type 31 general purpose frigates are intended to replace the general-duty Type 23s currently in service and also coming towards the end of their long and useful careers.