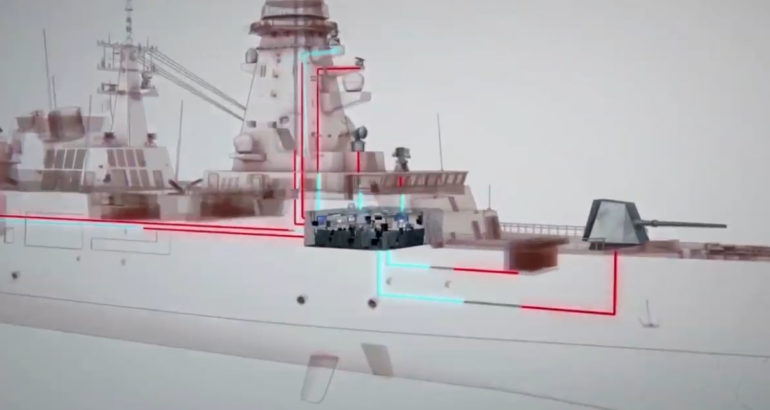 Leonardo showcased five naval systems for their Middle Eastern Virtual Conference Expo. The Italian-based company broadcasted live via virtual streaming in July 2020 due to the COVID-19 pandemic and made the one-hour video available for other viewers via an emailed invitation. Questions were asked at the end of the presentation and those answers are incorporated in the systems’ briefing overview.

In addition to the live presentation, the company set up a virtual booth which you may see at this link.

Five Leonardo naval weapons systems were shown and described in detail. They are the:

The Leonardo Anti-Torpedo Defense System can work in fully automatic mode, or in manual mode with an operator in the loop.

The system comprises of a Warning Sub-system (a stern-deployed Towed Sonar Array dubbed the “Black Snake” with a touchscreen panel and a laptop for controls) and the Reaction Sub-system that launches countermeasures consisting of two jammers and two decoys per incoming torpedo. The two decoys act as “impersonating ship targets” while the actual ship takes evasive action behind the acoustic noise produced by the air-launched underwater jammers. The intent is for the enemy torpedo to attack one of the two decoys or to be confused by the jammer noise and lose lock on the manned warship. Leonardo toted the whole system as both lightweight and compact and can fit onto almost any large, small, logistics, or naval vessel such as warships, tankers, oilers, troop transports, minesweepers, support craft, and cargo container ships.

The 6KM-long (3.72 mile) Passive Towed Array Sonar works by extending a cylindrical slide off the stern of the ship by using a lock control panel linked to wide touchscreen for system management. The Processing Unit is connected to the software’s common management system where the software controls the Towed array’s data to the ship. The Towed Array system is both deployable and recoverable and can operate at up to 80KTS in Sea State 5. At the end of the towed array is the four-meter long Antennae Sonar Buoy that turns received analog data signals into digital signals for onboard processing.

Once an enemy torpedo is detected, the Reaction Sub-system goes into action by controlling a pneumatic launcher where the pressure can be adjusted to launch the Anti-Torpedo decoys at specific ranges from the ship.

The Mobile Jammer Target Emulator (the MJTE Anti-torpedo decoy is 5” in diameter and 1.3 meters in length) enters the water at a preset distance regulated by the pneumatic launcher’s pressure. The MJTE can act as both a jammer and a decoy so it functions as two systems-in-one. Once the decoy jammer enters the water, it detaches the housing and the compression motor starts to generate decoy and jamming noise. MJTEs are recoverable and can be launched from any Air-to-Air Warfare (AAW) launcher by using a pyrotechnic canister.

For really small ships, Leonardo promoted its B538 Lightweight Launcher consisting of just one tube that can be arranged in clusters of three or six tubes in an outward facing arc for maximum coverage.

This mini-torpedo is currently under qualifications testing with some future contracts due. Leonardo’s presenter emphasized that the qualifications are suited for a lightweight mini-torpedo, and thus the Black Scorpion’s requirements are more lenient compared to heavier and larger torpedoes such as the Black Arrow™.

The Black Scorpion Miniature Lightweight Torpedo is five-inches in diameter and 1,100mm long, weighing in at under 20 kilograms, and running on a thermal battery. Warhead detonation is caused by target impact, or time-delay fuse, or from a run-dead battery after launch. The Leonardo conference host presenter stressed that this is a miniature lightweight torpedo and performs as such. Thus, the user should not expect the range, performance, and characteristics of a comparable lightweight, medium, or heavyweight torpedo in which Leonardo also manufacturers as torpedo variants. Black Scorpion, with its five-inch diameter, has the same size as Leonardo’s Anti-Submarine Torpedo countermeasures.

Naval News Editor-in-Chief Xavier Vavasseur asked during the webinar if the Black Scorpion could act as a hard-kill Anti-Torpedo Torpedo or as an ASW torpedo, which the presenter answered that it is technically feasible, but would put much performance expectations and strain on the Black Scorpion because it is a miniature lightweight torpedo trying to catch and kill a heavyweight torpedo, or act as a lightweight or medium-weight ASW torpedo, which it is not. As such, Leonardo recommends purchasing lightweight, medium, or heavyweight torpedoes instead for large ship and submarine ASW usage.

Another viewer asked if the Black Scorpion can be used by Dry Combat Submersibles (DCS) and SEAL Delivery Vehicles (SDV) such as those used by the U.S. Navy SEALs. Leonardo’s presenter replied that the SDV would need an internal torpedo launching tube fitting the dimensions of the miniature torpedo; however, Black Scorpion has been installed on a10-meter long vessel before so it should be technically possible to fit inside an SDV and DCS. Up to twelve Black Scorpions can fit inside a 250-ton vessel, or a midget submarine can carry six torpedoes each on the port and starboard side.

Another audience question asked if the Black Scorpion was ever test-fired from UAVs. The Leonardo presenter replied that the Black Scorpion mini-torpedo has not been tested on UAVs yet, but such a concept is very feasible and a study conducted by Leonardo identified the UAV that can be used to mount and fire the miniature torpedo.

The self-contained standalone Marlin 40mm Naval Gun System, or “Marlin 40™,” mounts on ships with no deck or hull penetration for use against Fast Attack Craft, drones, and helicopters and requires no International Traffic in Arms Regulations (ITAR) export license.

Marlin 40 has a selective rate-of-fire of one, 100, or 300 rounds per firing with 72 ready-to-fire rounds available in the turret. The magazine is Dual-Feed and can house programmable rounds, even 40/70 rounds (40mm diameter with a barrel length of 70mm). Additional rounds outside the turret can be housed if a magazine penetrates the deck and into the hull and such an under-deck magazine would allow for the loading and unloading of extra 40mm rounds.

Marlin 40 can have an independent remote fire-control system located on the ship, or an Electro-Optical Director and Muzzle Velocity Radar targeting system turret mounted on top of the Marlin 40’s turret roof to provide a standalone 40mm system.

The Leonardo 76/62™ Naval Gun (76mm or 3-inch) has a deck/hull penetration mounting with the following performance parameters:

A Multi-feeding Kit under the turret and penetrating into the hull allows for the selection of multiple rounds from the Kit’s magazine regardless of the shell’s position in the magazine. A rolling robotic shell-loading-crane travels through the magazines and selects the rounds for loading into the gun. The magazine racks’ design and the robotic shell-loading-crane allow the operator to see the type of vertical rounds when they are stored and loaded into the gun.

Leonardo toted the STRALES™ Kit that uses a guidance radar housed in front of the turret under an overhead flip cover to guide and actually fly Fin Stabilized Discarding Sabot (FSDS) DART rounds toward airborne, missile, or surface target interception. By using the DART’s fins and canards to maneuver, radar-guided DART rounds are much more effective at 76mm gunfire accuracy and have longer range than a standard 76mm round. The optimal missing distance of a DART round is 4-8 meters and the safety distance stands above 100 meters after firing to avoid any airburst shrapnel damage to friendly assets.

The 76/62 STRALES Kit allows shells to have a proximity microwave fuse for the detonation of a tungsten warhead inside a segmented liner to form airburst shrapnel within 4-8m meters of an airborne or surface target. A Leonardo test-firing video actually showed the STRALES’s radar guide three FSDS DART rounds that bobbed and weaved to curvingly intercept and destroy a Drone target instead of conventional unguided rounds being fired straight line-of-sight and missing in order to “Walk the rounds into the target.”

The STRALES radar saves 76mm gun ammunition by using the radar-guided Radio Frequency DART FSDS rounds, and DART can be used against missile, surface, or drone swarming attacks. Estimated range of various DART rounds is around 6 Km, against flying threats (in particular missiles) and 8 Km, against surface threats.

The NA30S MK2 radar is independent of the gun turret and can control up to three-gun turrets using X and Ka-Band radio waves and optical sensors. X-band is used for medium to long range detection, acquisition and tracking whereas the Ka-Band is for close-in and low-flying detection and 76mm FSDS DART shell guidance. With the NA30S MK2 radar installed, the 76/62 STRALES turret radar guidance kit is not required to guide DART rounds.

Leonardo also described the VULCANO extended-range guided shells. VULCANO’s guidance comes from a GPS and an inertial guidance unit. Upon firing, the VULCANO round follows a ballistic path upwards, then a course-correcting gliding path, and then a downward terminal path to the target. The GPS VULCANO shell has a Radio Frequency sensor to receive course correcting guidance.

The Leonardo 5-inch (127mm), 127/64™ Lightweight Naval Gun has a seawater-cooled barrel and an angled flat-face stealth turret housing. Performance rate-of-fire is 32 rounds per minute with 56 ready-to-fire rounds and an a 0.5m radius accuracy when the ship is stationary. 127/64’s shell range is 23KM (14.2 miles) with conventional rounds, or 60KM (37.2 miles) with ballistic VULCANO rounds, and 85KM (52.81 miles) with guided course-correcting VULCANO rounds, respectively, although some special VULCANO rocket-assist rounds could extend the range beyond 100KM (62.1 miles). The 127/64’s lightweight gun barrel elevation is –12 to 70 degrees and its dry weight is 36.3 tons (33,000KG) without munitions loaded. The 127/64’s turret magazine penetrates down one to two decks into the hull.

The 127/64 has four rotating magazines drums in the hull that allow for the reloading and substituting of five-inch shells in three of the magazines while one magazine is used to load and fire the gun. Leonardo 127’s expected service life cycle is greater than 25 years.

The Leonardo virtual conference presenter said that the 127/64 gun is already fully qualified and tested with the VULCANO 127mm. A 155mm (6-inch) variant was qualified by Leonardo as well, following some tests and demonstrations conducted in partnership with U.S. company BAE Systems.