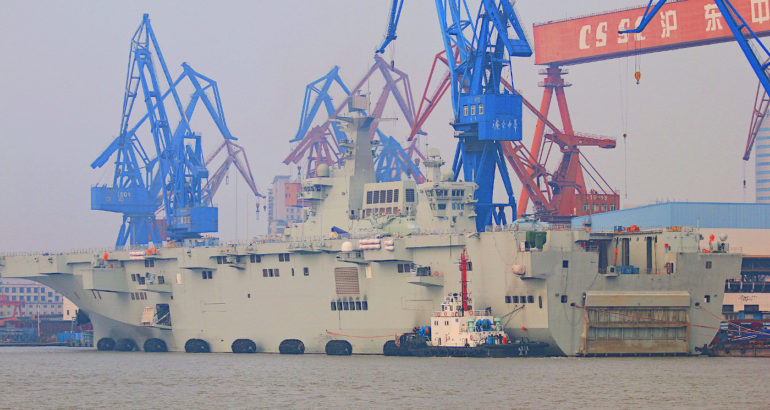 Open source intelligence (OSINT) shows the lead Type-075 being prepared for sea trials. Note the smoke stains near the stern. Photo via @Rupprecht_A (via by78/SDF)

The vessel, which was built in Shanghai, has been fitting out since it was floated on September 26 2019. Candid photos surfacing on the Chinese internet show it being fueled, and tugs readied.

The Type-075 represents a step-change in Chinese Navy (PLAN) amphibious warfare capabilities. It will enable better over-the-horizon landing capabilities and improve air cover. And there are already rumors of the follow-on Type-076 LHD which is expected to include EMALS (Electromagnetic Aircraft Launch System) for UCAVs or crewed aircraft. At this stage these rumors should be treated with caution. But they do give an indication of the direction PLAN amphibious capabilities are going.

In addition to the well-deck for Type 726 hovercraft (generally equivalent to the US Navy’s LCAC – Landing Craft Air Cushion), the LHD will have a large rotor-wing component. This will include the ubiquitous Z-8 transport helicopter which is based on the French SA 321 Super Frelon. More modern types seen aboard, in mock-up form, include the naval variant of the Harbin Z-20. This is, in our opinion, a copy of the Sikorsky S-70 Black Hawk / Sea Hawk family.

There are also small rotor-wing UAVs and even a Ka-27/28 HELIX anti-submarine warfare helicopter model aboard for deck tests:

The carrier suffered a fire incident on April 11 2020. Although the fire was quickly put out and damage appeared minimal, smoke stains are still visible in the aft port-side near to the ramp.

The Hudong-Zhonghua yard in Shanghai where the lead Type-075 has been built has already launched a second ship. And analysis of commercial satellite imagery suggests that module for a third may be on its way. At the moment the yard is building the Type-054A frigate for the Pakistan Navy and, it appears, a Type-071 LPD for Thailand.