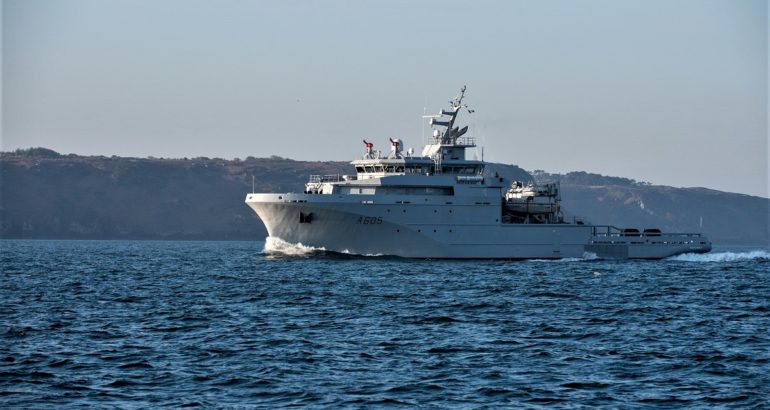 Naval News first learned about plans to experiment the compact VDS solution aboard the multipurpose vessel during DSEI 2019, while covering Garonne, the fourth and final vessel of the Loire-class.

“There is some project to deploy a towed sonar onboard [Garonne] which would be placed into a container” LT Cmdr Congues, Garonne‘s Commanding Officer, told Naval News during the event in September last year. (see our video below).

One month later, during PACIFIC 2019 in Sydney, Australia, Admiral Prazuck, the Chief of Staff of the French Navy confirmed those plans. He told Naval News that he has been pushing for the experiment to happen and he was happy to see the project materialize.

Then in January 2020, we learned additional details on the upcoming sonar trials from the French Navy:

At this stage, these trials are only an experimentation to assess the relevance of the concept. All options are on the table, from the integration of the system aboard a vessel to the acquisition of a batch of containerized sonars for monitoring our maritime approaches. What follows will obviously depend on the results of the experiment, but also on the evolution of the strategic context, and the options adopted for all the sonar systems of the French Navy and its allies.

We contacted Thales about these trials but the defense company said it was not able to communicate on this topic. Naval News then learned from a DGA spokesperson in mid-july that the experimentation formally started last week, in late July. Pictures of the CAPTAS-1 container aboard Garonne were not available at the time of writing this article.

It has to be noted that Garonne is based in Brest, close to the SSBN base of Ile Longue. Fitting CAPTAS-1 VDS aboard those multipurpose vessels could help secure the zone whenever French SSBNs deploy and return from their deterrence missions. This is when the submarines are typically most vulnerable, most exposed and potentially most detectable.

More sonars in the fleet to counter a growing submarine threat

The French Navy is currently looking to increase the number of sonars in its fleet to counter the growing submarine threat (which, according to analysts, is happening globally but particularly in the indo-pacific region).

Three of the five La Fayette-class frigates will be fitted with a Kingklip hull mounted sonar by Thales during their mid-life update. Meanwhile, another frigate of the class, Surcouf, has been fitted with a BlueWatcher hull mounted sonar since early 2018. In addition, the DGA spokesperson confirmed to Naval News that the future Patrol Vessel class of the French Navy (known as the “PO” program for Patrouilleurs Océanique) will likely feature sonar systems as well: “We are moving towards the integration of a yet to be defined hull mounted sonar”.

Unveiled at Euronaval 2014, the CAPTAS-1 is the most compact member of the CAPTAS family of VDS. According to Thales, it provides a very efficient anti-submarine warfare (ASW) capability in littoral waters and is capable of long range detection in shallow and deep water. It is tailored for small and medium-sized surface vessels displacing 300 tons or more.

CAPTAS-1 can be integrated directly to a vessel or can come as a 20 feet ISO containerized solution (with a dedicated console inside the container for ships not fitted with combat management system, which is the case of Garonne).

During NAVDEX 2017, the UAE Navy announced a contract for the procurement of several CAPTAS-1 VDS containers from Thales, becoming the launch customer. According to Thales sources, a second (undisclosed) customer has since selected CAPTAS-1. Back in 2016, the compact sonar solution was tested aboard CNIM’s L-CAT landing craft.

The first BSAM, Loire, operates from Toulon; the second ship of the class, Rhone, operates from Brest. The third unit, Seine, is based in Toulon and Garonne is based in Brest. All vessels were designed and built by the Kership shipyard in Brittany between 2016 and 2019. The final ship, Garonne, entered active duty in January 2020.