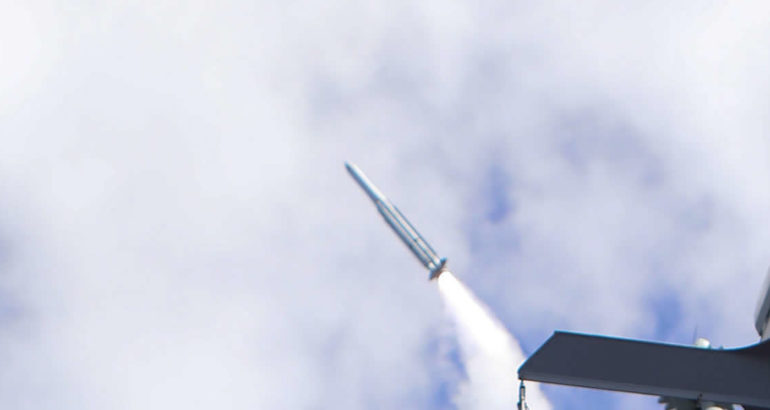 PACIFIC OCEAN (Aug. 23, 2020) Royal Australian Navy ship HMAS Arunta (FFH 151) executes a live missile firing off the coast of Hawaii during Exercise Rim of the Pacific (RIMPAC). Ten nations, 22 ships, one submarine, and more than 5,300 personnel are participating in Exercise Rim of the Pacific (RIMPAC) from August 17 to 31 at sea around the Hawaiian Islands. RIMPAC is a biennial exercise designed to foster and sustain cooperative relationships, critical to ensuring the safety of sea lanes and security in support of a free and open Indo-Pacific region. The exercise is a unique training platform designed to enhance interoperability and strategic maritime partnerships. RIMPAC 2020 is the 27th exercise in the series that began in 1971. (Royal Australian Navy courtesy photo)

Conducted alongside ships from Canada and the United States, Commanding Officer Arunta Commander Troy Duggan said the firing demonstrated the lethality of the upgraded Anzac-class frigate and its world-class Australian systems.

“This is the first time an AMCAP frigate has participated in Rimpac, and demonstrates the capability of the new phased array radar suite as an integrated sensor for the combat system,” Cmdr Duggan said.

Completed in 2019, the upgrade provides the Anzac-class frigates the first CEAFAR2-L long-range phased-array air search radar. This world-leading radar technology has been designed in Australia to provide long-range situational awareness to the ship and allied units.

Missile firings are conducted on the Pacific Missile Range Facility in Hawaii.

The range used remote-controlled drones to simulate missile attack profiles against Arunta, and the ship engaged them with surface-to-air missiles.

Cmdr Duggan said the ship’s company had trained extensively for the event.

“These sorts of complex warfighting exercises with multinational partners demonstrate that the Royal Australian Navy is able to operate seamlessly with other highly advanced navies in our region,” he said.

Ten nations, 22 surface ships, one submarine, multiple aircraft, and about 5300 personnel are participating in this iteration of the biggest international naval exercise.