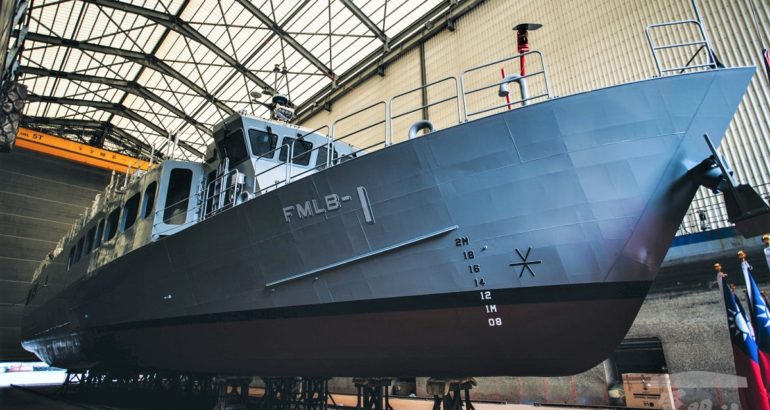 The fast mine-laying ship is expected to be delivered at the end of the year. ROC Military News Agency photo.

A launching ceremony was held on August 4th at Taiwanese shipbuilder Lungteh Shipbuilding for the 1st Min Jiang-class mine laying ships. The new class is being built for the Republic of China (ROC) Navy.

The vessel received the pennant number FMLB-1 (likely for Fast Mine Laying Boat).

The keel laying ceremony for the first-in-class ship took place on May 24 last year (along with three catamaran corvettes) while construction on the second ship of the class in ongoing. The event also marked the “mast raising” event for the first vessel.

The first mine laying vessel is expected to be delivered this year, according to plans. Some media reports refer to the vessel as the “Min Jiang-class”, however Naval News’ Taiwanese sources explained that this name has yet to appear in official documents.

In his speech, ROC Navy Commander Liu Zhibin stated that the first ship of the fast mine-laying craft program is expected to be delivered at the end of the year, according to the schedule.

According to Taiwan’s defense ministry, the four mine laying ships are expected to be completed in 2021, which will greatly enhance Taiwan’s offensive mine fighting capacity and effectively counter the threat of the communist army.

The fast mine-laying ships were designed based on enemy threats and combat requirements, combined with the current mine-laying operations plan, to strengthen the threat of enemy ships crossing, and create a favorable situation for joint defense operations.

About Taiwan’s mine laying ship

During the keel laying ceremony of the first-in-class ship, Taiwanese defense officials were quoted saying: “the mine layer ships were designed to face down an attack by amphibious vehicles trying to land in Taiwan, and would be equipped with a more precise automatic mine laying system”.

According to Lungteh Shipbuilding, the vessels have a length of 41 meters, a width of 8.8 meters, a draft of 1.7 meters and a full load displacement of 347 tons. The maximum speed is 14 knots.

In addition to the sea mines (carrying capacity is unknown) the vessel is fitted with a 20mm T75 gun mount (as main gun) and two T74 machine guns (manned 7.62×51 mounts).

The vessel comes with an automatic mine-laying system and propulsion equipment that allows it to lay mines rapidly and with high accuracy.