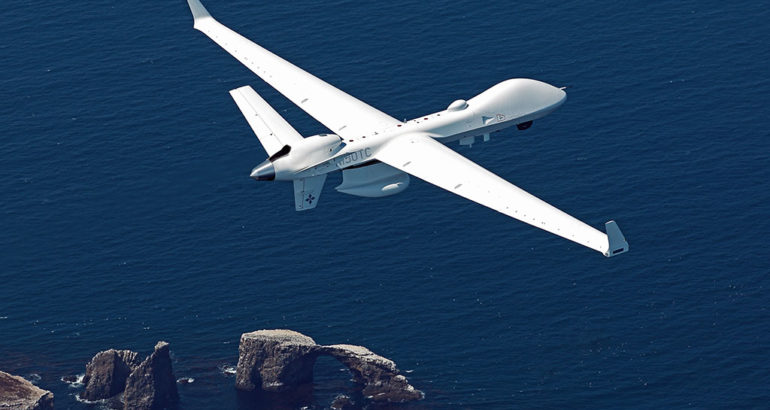 MQ-9B SeaGuardian maritime tests flights concluded off the coast of California on September 11th. They can probably be seen as the next step toward a worldwide export success. Indeed, if the first variant of the MQ-9 Predator-B mainly served as an ISR platform for above ground missions, the new MQ-9B SkyGuardian/SeaGuardian is likely to find much more customers in its maritime variant.

Contrary to first generation MQ-9A Reaper, the MQ-9B SkyGuardian/SeaGuardian are designed to operate within civilian airspace. The SkyGuardian/SeaGuardian meets NATO STNAG 4671 airworthiness requirements, FAA and EASA flight regulations, and can be easily certified to other civilian or military certification standards. This feature convinced several countries to procure the “B” variant, including the United Kingdom (Protector RG Mk.1), Australia and Belgium.

The SeaGuardian was selected by the Indian Navy in 2017 in order to survey the country’s coastlines. Due to budgetary restrictions and increasing border tensions in the Eastern Ladakh, it is possible that the SeaGuardian order will be reduced. Other possibilities include the postponement of the contract or its conversion for the less expensive land-focused MQ-9 Reaper.

More recently, in August 2020, Reuters revealed that the United States is negotiating the sale of at least four MQ-9B SeaGuardian to Taiwan. Taipei is indeed in desperate need for long range maritime surveillance systems, due to the PLAN increasing activities in the area. In Taiwan service, the SeaGuardians will operate alongside the ROCNAC’s P-3C Orion aircraft. Stealthier and flying at higher altitude, the SeaGuardian is then a good complement to the manned aircrafts.

Still in August, GA-ASI announced its plans to conduct validation flights in Japan in mid-September, with the collaboration of the Japan Coast Guard and the Japan Maritime Self Defense Force. With its huge EEZ, its complex coastline and numerous islands to monitor over thousands of kilometers, Japan is a major potential customer for the SeaGuardian drone.

In Europe, after Belgian and British selection of the SkyGuardian, General Atomics is seeking for new customers for its SeaGuardian. In December 2019, the drone conducted a series of flight demonstrations over the Aegean Sea, in partnership with the Hellenic Air Force and Hellenic Coast Guard. Once again, the drone’s dual ability to operate over open-sea and land could perfectly fit Greek’s needs over the Aegean Sea region.

In France, reference has been made to the SeaGuardian as an interim solution for naval surveillance before the long awaited EuroMALE RPAS enters operational service. Even if France is already using MQ-9A Reaper, the MQ-9B SeaGuardian would probably compete against the locally designed Patroller, which is also certified by the EASA. Even if the Patroller is technically a tactical UAV, its range, service ceilling and payload makes it a “near MALE” UAV. As a long range maritime surveillance drone, it can carry a maritime radar, an AIS and an Euroflir 410 EO/IR system. Still, the Patroller lacks the maturity of the Predator-B/Reaper/Guardian family, and comes short in terms range and payload.

While newcomers are likely to appear on the long range maritime surveillance drones market, General Atomics is today well established and one step ahead of the competition. The first generation MQ-9A has a limited maritime use. Its roles with the US Customs and Border Protection and US Coast Guard are non-military. But the new Guardian family –previously known as “Certifiable Predator-B”– will certainly have a far brighter career as a maritime (or dual use) surveillance aircraft.