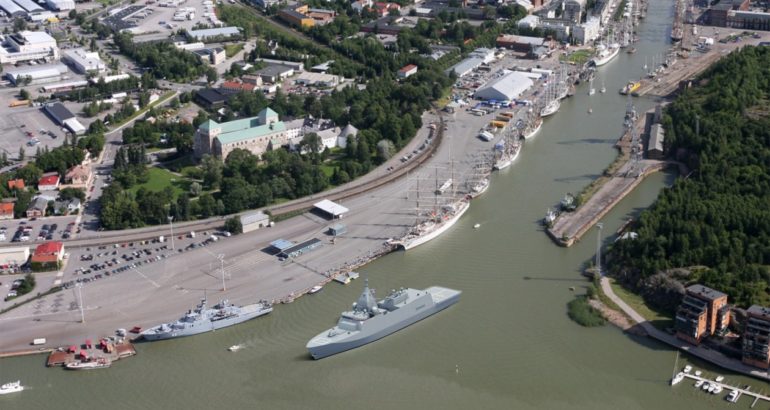 Artist impression of a Pohjanmaa-Class corvette in Turku, close to Pansio Naval base. Finnish Navy picture

Finland's Pohjanmaa-class corvette program is making good progress. According to the Finnish Navy, the procurement contracts signed a year ago laid a solid foundation and the preparatory work is currently underway for the start of construction in 2022.

The Pohjanmaa-class corvette will be the backbone of the Finnish Navy’s fleet for decades to come, but it will be a while before the first ship hits the water.

The physical steel cutting and welding of the ships is planned to start at Rauma Marine Constructions in 2022. This is a new challenge for the shipyard. Modern warships differ from the yard’s most traditional ship designs, such as passenger car ferries in many respects. Due to its nature, the project for the Finnish Defense Forces also requires stricter security arrangements than usual.

The vessels are to be built under a canopy, which is why the yard is currently planning the necessary hall investments to implement this construction method.

The shipyard, which has a long shipbuilding tradition in Rauma, will take on a new area when it starts practical work on a challenging warship project. Jyrki Heinimaa, CEO of Rauma Marine Construction, describes the project ahead:

A warship is made for combat and in that sense very different from a passenger car ferry. Unlike passenger car ferries, warships do not have common large spaces for people and goods. The warship is a very compact entity, which means that the available space must accommodate the maximum number of equipment, systems and people.

Construction must take place in a very strictly decided order. In this respect, advance planning of shipbuilding is extremely important for construction.

An exceptionally efficient and versatile combat system, ie a combat management system, sensors and weapon systems, will be procured for the ship class on the scale of the Navy and partly also the Defense Forces. Such a class of surface combatant capable of mine laying and mine counter measure missions has no equivalent in the world.

The co-operation between the Finnish Navy and Rauma Shipyard has been excellent throughout history and the co-operation is still seamless. The decision-making of the Squadron 2020 project involved and will involve many different stages. Due to the different construction model, which includes the Finnish Defense Forces Logistics Department and the combat system supplier Saab, the project’s cooperation requires continuous tripartite cooperation in the implementation of the project.

The Pohjanmaa-class corvettes (Squadron 2020 program) will be constructed in Finland. They will be multi role surface combatants with ice breaking capabilities. The construction contract (worth 647.6 million Euros) was awarded to Finnish shipbuilder Rauma Marine Constructions in September 2019. The construction of the four corvettes will is set to start in 2022 and end in 2025. Full operational status of the entire Pohjanmaa-class with the Finnish Navy is expected to be achieved by 2028.

Saab was selected in September 2019 to provide and integrate the combat system and sensors of the corvettes. The vessels will be equipped with ESSM surface to air missiles, Gabriel V anti-ship missiles and Torpedo 47 torpedoes. Kongsberg will equip the vessels with its SS2030 and SD9500 sonars.