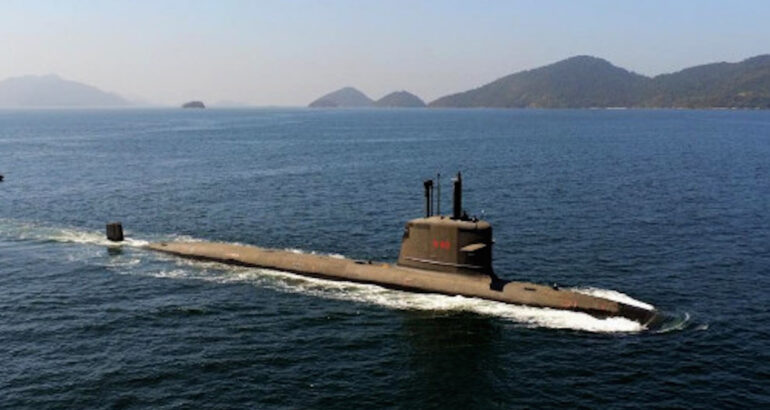 The propulsion tests of Riachuelo took place in an area located inside Sepetiba Bay, on the south coast of Rio de Janeiro. At-sea acceptance tests are going on according to the trials program with completion still scheduled for December 2020.

After this phase, the Riachuelo will pursue with combat system tests, culminating with the launch of the F21 torpedo and submarine-launched SM39 missile. In mid-2021, the S40 is set to enter operational service.

Meanwhile, the assembling process of the Tonelero (S42) is progressing according to the program schedule. The Main Electric Motor (MEP) has now been installed in section S1 (the most aft part). Sections that make up the forward part of the submarine (S2B, S3 and S4) were properly transferred to the final assembling plant. The sections weight a total of 619 tons, are 39.86 meters long and 12.30 meters high, and were transported by a 320-wheeled super heavy transport vehicle.

Their journey started at the Metal Structures Manufacturing Unit, with a final destination at the Itaguaí shipyard. Transfer took approximately nine hours. This complex operation, perfected since the transfer of the first hull section of the Riachuelo in 2017, requires detailed planning by the Navy and the shipyard, Itaguaí Construções Navais (ICN).

The arrival of the units at the construction plant marks the beginning of the final assembly process of the Tonelero submarine, with the final integration of the hull planned for December 2020. The launch at sea is planned for the second half of 2021.

The current schedule of the PROSUB program foresees the launch of the Humaitá (S41) in December 2020, Tonelero (S42) in 2021 and Angostura (S43) in 2022. The Álvaro Alberto, the first Brazilian submarine with nuclear propulsion (SN-BR), is due to be launched in 2031. The SN-BR, as well as the incorporation of the four Riachuelo-class submarines will increase the capacity of the Brazilian Navy to respond efficiently to the enormous challenge of controlling and protecting the “Blue Amazon”, which represents one third of the country’s borders.