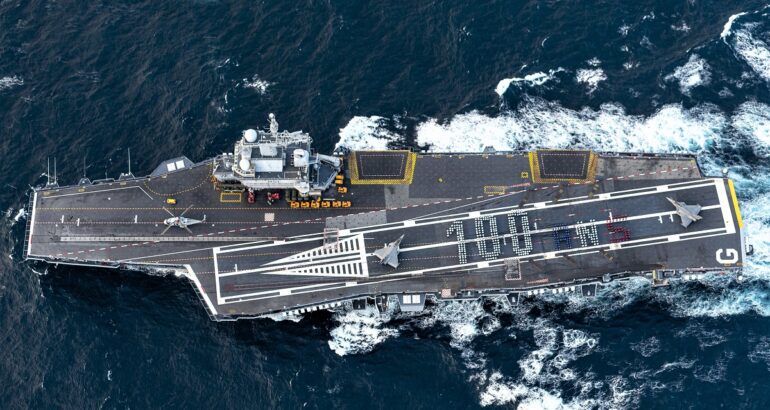 Lt. Test, flying a Hanriot HD.1 aircraft, took off from the Palyvestre (currently known as Hyères naval air base). He flew above Toulon naval base and, after spotting aircraft carrier Béarn, made a first approach, then lined up in the axis of the vessel, cut off the throttle at an altitude of 50 cm and made a perfect landing in less than 30 meters.

Prior to this historical event, some early experimentations were conducted: On May 8, 1914, René Coudron succeeded in taking off from a 34.70-meter platform installed on the Foudre (torpedo boat) in the bay of Saint-Raphaël. After the United States (1910) and the United Kingdom (1911), France becomes the third nation in the world to launch a plane from a ship. However, the French Navy continued to rely on seaplanes until the end of World War I. Some tests were also conducted with Arras-class aviso Bapaume (1918 – 1936) with was also fitted with a flight deck in 1920.

Béarn was an aircraft carrier converted from an incomplete Normandie-class battleship for the Marine Nationale. The hull was launched on 15 April 1920. That year, a French delegation visited the British aircraft carrier HMS Argus, and out of this visit came a proposal to convert one of the incomplete Normandie-class battleships into an aircraft carrier, which was designated Project 171. The first step was to conduct trials using Béarn‘s hull which was only complete up to the lower armored deck and lacked her belt armor and propulsion machinery. A 45-by-9-meter (148 by 30 ft) wooden platform was built on the lower deck with an improvised arresting gear system that was weighted down with sandbags. Following these tests, the minister decided to complete the Béarn and make it the first in a long line of aircraft carriers:

Following the conclusive tests of Lt. Teste, the conversion of the Béarn was completed and the tests continued at Saint-Raphaël in May and June 1921. This ex-battleship became de facto the first French aircraft carrier.

Its airwing consisted in about thirty aircraft, organized into three squadrons:

The vessel had a full load displacement of 25,300 tonnes with a length of 182 meters. Its maximum speed was 21 knots. It had a wooden-covered flight deck measuring 180 meters by 27 meters, but had no catapult, arresting wires, or angled deck.