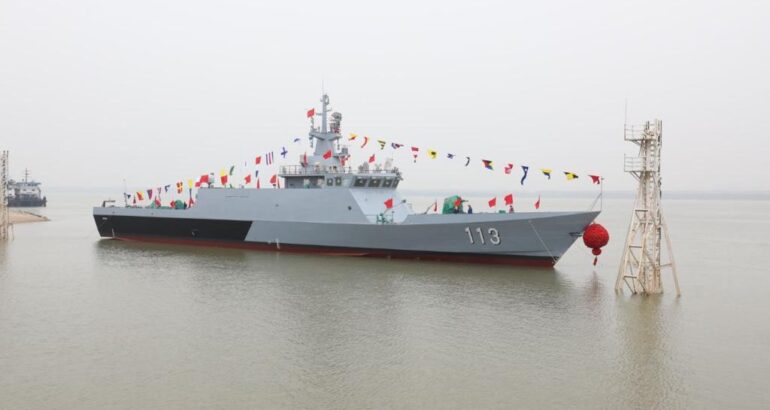 The third LMS for the RMN. RMN picture.

The third Littoral Mission Ship (LMS) for the Royal Malaysian Navy (TLDM or RMN) was launched today at the Wuchang Shipbuilding Industrial Group, in Wuhan, China.

The next phase for this vessel is the harbor-side Acceptance Test Phase. However, following the worldwide outbreak of the COVID-19 pandemic epidemic, the official naming ceremony of this Third LMS was postponed and will be held simultaneously with the ship’s Physical Delivery Ceremony. scheduled for September 2021.

This Third LMS will join the 11th LMS Squadron with KD Keris (First LMS) and Sundang (Second LMS). Keris was launched in April 2019 and commissioned in December 2019. Another vessel (Fourth LMS) is expected to be launched in November 2020. Procurement of these LMS vessels is implemented under the Contract of the Ministry of Defense Malaysia with Boustead Naval Shipyard Sdn Bhd which was signed on 23 March 2017 in collaboration with China Shipbuilding & Offshore International Co. Ltd. (CSOC), China.

LMS is one of the five (5) class of ships in the 15to5 Fleet Transformation Program. LMS is capable of performing patrol duties, maritime surveillance, Search and Rescue (SAR) as well as enforcing Malaysian maritime law.

This third LMS will undergo a series of Harbor Acceptance Tests and then Sea Acceptance Tests before being handed over to the RMN at the end of September 2021. The second vessel, Sundang was launched in July 2019 and was set to be delivered in April this year but this has been delayed because of the pandemic.

For the record, the acquisition contract of the LMS was signed on 23 March 2017 between the Malaysian Ministry of Defense and Boustead in collaboration with CSOC, China. LMS is one of the five classes of ships in the 15to5 Fleet Transformation Program. LMS construction is characterized by “fit for purpose”. This coastal patrol ship is a modular concept that is capable of being configured for specific missions depending on the needs.

According to Janes, LMS type vessels have issues with their combat system, the RMN having compiled a list of deficiencies that were observed while operating the first in-class-ship.