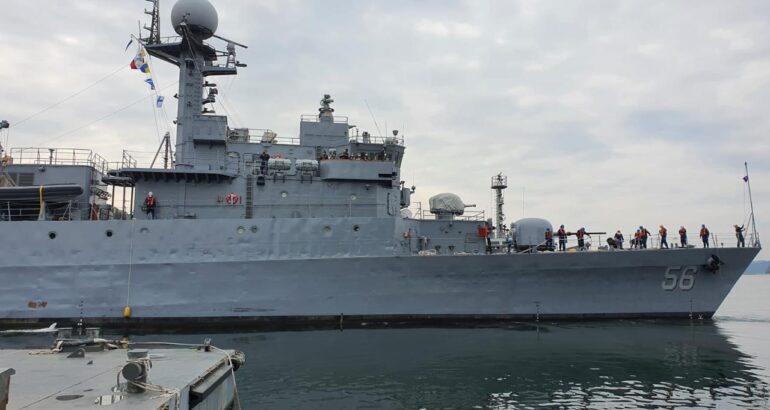 ARC “Almirante Tono”, a Pohang-class corvette, departed Jinhae Naval Base in South Korea to begin its journey home. Its first port of call will be Guam before arriving at the Cartagena Naval Base, where the vessels will join the Caribbean Naval Force to contribute to the reinforcement of the Colombian Navy fleet.

The corvette was donated and transferred to Colombia on September 28, 2020 within the framework of the 70th anniversary of the Korean War, in which the Colombian Navy participated with the frigates Almirante Padilla, Captain Tono and Almirante Brion.

With 61 crew members, the ARC corvette “Almirante Tono” identified on the hull with number 56 will sail 10,581 nautical miles in Pacific Ocean waters for 51 days, passing through the ports of Apra Harbor on Guam Island, Honolulu in Hawaii, San Diego in the United States, arriving in Colombia in December.

The ship, a Pohang-class corvette, is the second ship that South Korea transfers to Colombia after the ARC Nariño, a Donghae-class corvette received in 2013. Previously known as ROKS Iksan, ARC corvette “Almirante Tono” was built by Hyundai Heavy Industries and launched as “ROKS Iri” on March 24th, 1987. She entered service on September 1988 and was renamed as ROKS Iksan on February 1999 when the namesake city was merged. After 30 years of service, she was retired on December 31, 2018.

The Pohang is a class of Patrol Combat Corvette (PCC) of the Republic of Korea Navy (ROKN). A total of 24 ships were built by several South Korean shipyards: Korea Shipbuilding Corporation, Hyundai Heavy Industries, Daewoo Shipbuilding and Korea Takoma.

The primary mission of the corvette is coastal line patrolling. Pohang class is deployed as a main force to monitor defence in the South Korean coast. These ships were equipped to perform anti-submarine, anti-ship and anti-aircraft warfare operations in the littoral environment.

As the Pohang-class ships are progressively being phased out of the ROK Navy (being replaced by the new generation Incheon-class frigates, and then eventually by the FFX batch II and FFX batch III), several of the corvettes have been transferred to South Korea’s allies (namely Peru, Vietnam, the Philippines and Egypt). The first-in-class ship is now a museum in Pohang city. The 14th ship of the class, ROKS Cheonan, was sunk on 26 March 2010 by a torpedo launched by a North Korean Yeono-class submarine, killing 46 sailors.