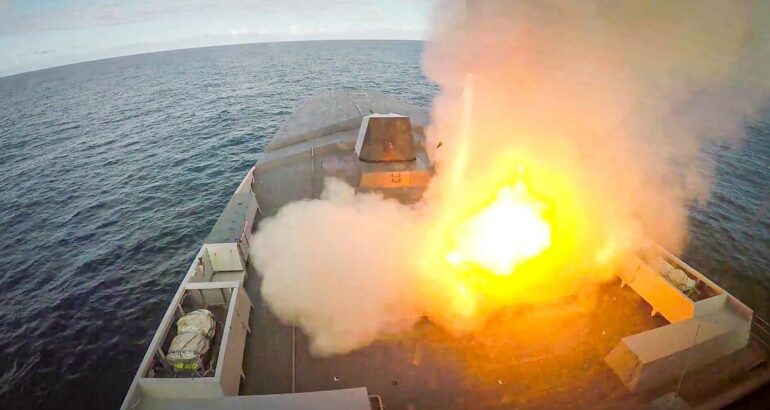 The information was shared by Admiral Vandier, the French Navy’s Chief of Staff, on Twitter:

On November 10, the multi-mission frigate Bretagne successfully carried out a naval cruise missile (MdCN) firing drill. Training its crews in an operational situation allows the Navy to be ready to intervene in a combat situation. The MdCN allows the Marine Nationale to conduct land attack operations from the open sea and from the depths of the sea using multi-mission frigates and Suffren-class submarines.

Bretagne is the fifth of six anti-submarine warfare FREMM frigates ordered for the French Navy. Built at Naval Group shipyard in Lorient, Bretagne was launched in September 2016 and was delivered to the French Navy on July 18 2018. She was commissioned in February 2019 following her long cruise.

For the record, back in April 2018, the United States, the United Kingdom and France launched missile strikes against installations of the Syrian regime in Damascus and near Homs. The strikes, given the name Operation ‘Hamilton” by the French military, were carried out in retaliation for the chemical attack on Douma. Three Syrian regime sites were targeted: a scientific research study centre located north of Damascus used for the development of Syrian chemical weapons; and two chemical weapons warehouses near Homs. The coordinated strikes were delivered by ship-launched, submarine-launched and air-launched cruise missiles.

The operation was declared a success, with all three targets destroyed. It marked a first as it was the first time that land attack cruise missiles had been fired from a European surface combatant. However, it subsequently emerged that the French Navy had encountered some difficulties in completing its part of the cruise missile strike.  Three FREMM frigates had been deployed for the operation, with Aquitaine as the main unit, Auvergne acting as backup for Aquitaine, and Languedoc as backup for Auvergne. However, both Aquitaine and Auvergne failed to launch their naval cruise missiles. It later emerged that it was due to a combination of factors (tight window of opportunity for launch and little experience of the crews with the missile system, the French Navy having performed only one test firing in 2015).

Subsequently, the French Navy learned from this operation and used its feedback to further improve the process in the use of the naval cruise missile. The Chief of Navy of the time, Admiral Prazuck, launched an ambitious plan called “Mercator” calling for each major unit crews to test at least “one missile system” once every two years. Likewise, MBDA and Naval Group were tasked to improve the naval cruise missile launch system (both in terms of reliability and ease of use). The test firing conducted this week from Bretagne is probably related to the feedback from Operation ‘Hamilton’ and to those system improvements.

MBDA has developed NCM(Naval Cruise Missile) to meet the requirement issued by the French Ministry of Defence for a long-range cruise missile capable of being launched from surface and below surface vessels. This French programme is known as MdCN or Missile de Croisière Naval, intended for the French Navy’s FREMM frigates and the Barrracuda submarine.

NCM provides a unique operational capability, with very long range high-precision strike against politically/military sensitive targets. The missile has been designed for vertical launch from the compact A70 SYLVER vertical launcher which is also capable of housing other MBDA missiles such as the ASTER family of air defence missiles. NCM has also been designed to be launched from the 21 inch torpedo tubes of a submerged submarine.