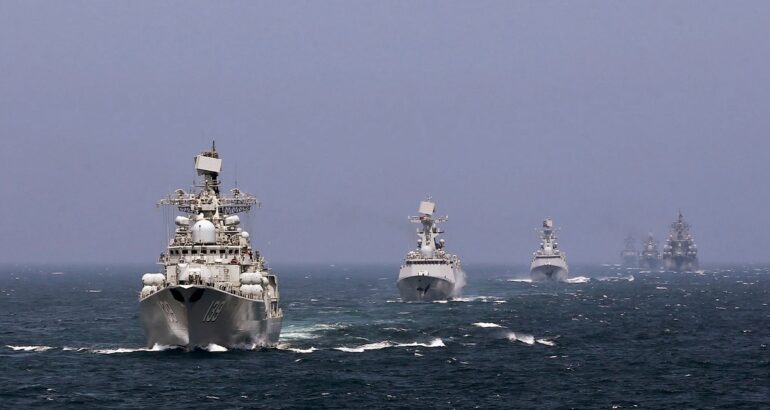 Chinese and Russian warships during a joint drill on the East China Sea in 2014. China Daily picture.

The speech of the Russian president at Valdai discussion club contained interesting statements on the state and prospects of the check-and-balance system to prevent a large-scale armed standoff of superpowers. He spoke about military cooperation of Russia and China. In case they create a military union, each party will have to contribute to it, the Independent Military Review writes.

Asked about the possibility of a military union between Russia and China, Putin said:

“it is possible to imagine everything. Our relationship has reached such a level of interaction and trust, that we do not need it, but theoretically it can be imagined. We jointly hold regular military exercises at sea and on the ground in China and the Russian Federation. We exchange best practice in military buildup. We have reached a high interaction level in military-technical cooperation, and it is likely the main thing. The talk is not only about exchange and acquisition of military products, but also technology transfer. There are very sensitive things and I am not going to speak about them in public, but our Chinese friends know them. There is no doubt that our cooperation with China increases the defense capability of the Chinese People’s Army. Both Russia and China are interested in it. Life will show how it all would develop,”

If the military union is created, how Moscow and Beijing will contribute to it?

The picture is as follows in the naval cooperation: China is the world leader in shipbuilding and exceeded the United States in the number of warships — 350 against 293. The strength of navymen is comparable — each party has over 300 thousand men, but the Americans are ahead in the total displacement.

If the navies of US military allies in the world are considered, the total fleet is much stronger than the Chinese Navy. The collective West has many more heavy warships. The USA has 11 aircraft carriers, European NATO allies — 3, and China — 2. The supremacy in nuclear submarines is impressive: 80 (including 70 US subs) against Chinese 10. The US Navy operates over 90 cruisers and destroyers plus a dozen French and British ones against Chinese 33.

The gap is smaller if Chinese and Russian navies are taken together. The Russian Navy is twice weaker than the Chinese one in the number of navymen and warships, but has a bigger strike potential due to missile complexes. Together they make equal forces at sea, which is important to maintain strategic balance between the East and the West.

The Russian and Chinese navies are complementary. Nuclear submarines comprise the backbone of the Russian fleet, while the potential ally has a lot of surface warships of various classes. In case of close interaction, the East will have a better-balanced naval force of various classes.

The analysis of existing shipbuilding programs shows that new-concept aircraft carriers with electromagnetic catapults and nuclear power plants, as well as Type 055 cruisers and Type 052D destroyers armed with cruise missiles similar to US Tomahawk and Russian Kalibr will improve the quality of the Chinese Navy in the coming 20 years.

There is no breakthrough in nuclear submarines. In the past 15 years, Chinese shipyards built 12 nuclear submarines, including two multirole subs of Type 093 and four subs of upgraded Type 093A. Four SSBN of Type 094 became operational and the construction of another two is nearing completion. They are likely to become operational in the summer of 2021 and will replace the first generation of Chinese subs that served for over 40 years.

The Pentagon believes the construction of Type 096 with the same number of launchers (12) as in 094, but new JL-3 ballistic missiles with a bigger range will begin in the middle of the decade. There will be 12 Chinese SSBN by 2030 which is comparable to the Russian program to build project 955 and 955A submarines. Four subs have been built and the construction of another four is ongoing.

Part 2 of this analysis will be published soon.