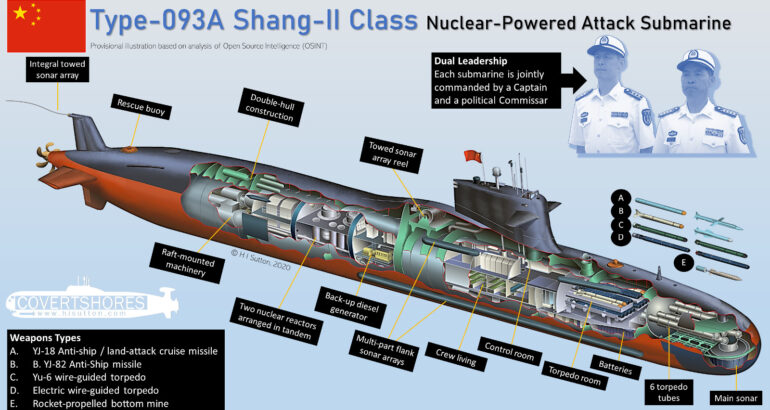 The Type-093A Shang-II Class submarine is equipped with a wide array of missiles and torpedoes.

The Chinese Navy’s Most Powerful Attack Submarine: The Type-093A

Submarine expert H I Sutton takes a close look at China's Type 093A submarine and explains what makes it the most powerful attack submarine in the People’s Liberation Army Navy (PLAN)'s arsenal.

China’s foreign policy is becoming more assertive. With this the Chinese Navy (PLAN) is increasingly willing to show its might. Their growing naval presence in the South China Sea is being augmented with new overseas bases to increase their reach. These are in Djibouti on the Horn of Africa, in Cambodia, and maybe in the future in Pakistan. These match potential flash points where the PLAN may clash with other navies, such as the South China Sea, Pacific Ocean and Indian Ocean.

The visible signs of the naval expansion include new aircraft carriers, assault carriers, cruisers, and destroyers. And underpinning it all is something which goes unseen: increasingly potent submarines.

The most modern of China’s current submarine fleet are the Type-093A Shang-II Class (aka 09-IIIA). These ~7,000 ton nuclear-powered boats are roughly the same size as the Royal Navy’s Astute Class. In fact, in size terms it sits between the latest French Navy Suffren Class and the U.S. Navy’s Virginia Class.

Their relatively large size may provide more space for noise reducing features. Acoustic stealth is one of the most prized attributes of modern submarines. The quietness of the design is classified information, but we can assume that they are becoming increasingly stealthy.

It’s estimated load of 22 torpedo-sized weapons is fewer than any of those boats however, although close to the smaller Suffren Class. Within this load-out it can carry the YJ-82 anti-ship missile, rocket mines and torpedoes. Both the Yu-6 thermal torpedoes, which are loosely equivalent to the U.S. Navy’s Mk48, and electric torpedoes will be carried.

They are also believed to be able to carry the YJ-18 supersonic cruise missile. This will likely form its main weapon against both warships and land targets, providing a first-night strike capability. The YJ-18 launch canisters may have been visible when President Xi Jinping visited a Type-093A on June 11, 2018.

Possibly the greatest difference to Western submarines is not part of its specification. Chinese submarines have a dual leadership model with the Captain joined by a political officer. These Commissars are of the same or similar (sometimes higher) rank. Generally the commissar is responsible for the crew’s welfare and moral, as well as monitoring political cohesion. Exactly how this joint leadership will perform in combat, where quick decisions are often critical, remains to be seen.

In the near future China may build a variant with a vertical launch system (VLS) for land-attack cruise missiles. There was speculation that the Type-093A model already had a VLS in the raised casing behind the sail, but this appears to be the towed sonar array. A cruise missile variant of the Shang may be a lower risk intermediate step before the altogether more powerful Type-095 Sui Class enters service. No 095s have yet been launched but the first tantalizing hints at a new class of nuclear submarines has recently been seen in commercial satellite imagery.

The Type-093A Class is currently the most powerful attack submarine in China’s arsenal. It is already a cause for concern for potential adversaries, the unseen component of China’s increasing confidence in the naval Arena. But the next class of Chinese submarine are likely to close the technological gap even further. We may soon find out.