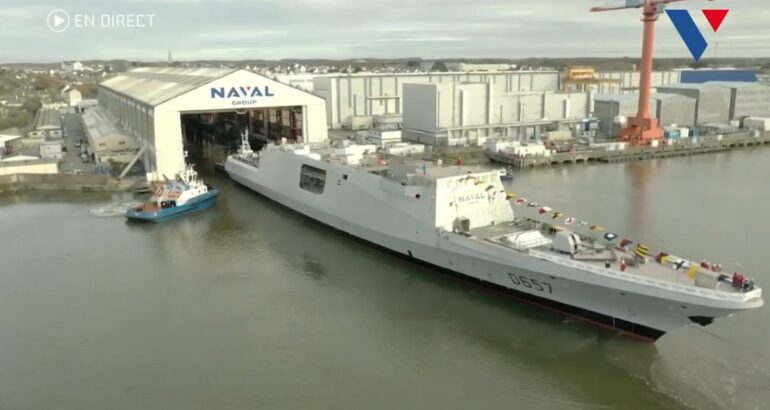 The FREMM DA Lorraine  was launched from the construction form of the Naval Group shipyard of Lorient fifty four months after its start of construction. It is the tenth and final FREMM frigate built by Naval Group and the eighth one for the French Navy.

The French Minister of Armed Forces Florence Parly, Admiral Pierre Vandier, Chief of Staff of the French Navy, as well as the Chairman and CEO of Naval Group, Pierre Eric Pommellet, alongside employees from the Lorient site participated to the launching ceremony.

“Throughout this demanding program, we have maintained close ties with our customer, in order to best respond to the expectations and the technological challenges regarding the onboard innovations. This feedback led us to change the industrial organization. Modular construction, supply chain optimization and block pre-fabrication have reduced construction lead times and, ultimately, production costs. As a result, we have gained in efficiency and performance, while at the same time improving the working conditions of our employees, which has led to a considerable reduction in work accidents. We are proud to launch today the latest FREMM France! »

Naval Group’s industrial site in Lorient has major industrial infrastructures that enable the French shipbuilder to meet the technical and technological challenges of the naval vessels for which it is responsible, including a 15,000 m2 covered construction form.

FREMM DA program still on time despite the pandemic

Lorraine‘s sistership, Alsace, was launched in April 2019 and started her sea trials last month. Alsace was expected to begin sea trials in May this year. Because of the COVID-19 pandemic, the shipyard stopped production for nearly two months, delaying the program by nearly four months (because of subsequent impact on the overall supply chain). Likewise, Lorraine was set to be launched in September 2020. Naval Group still expects to deliver the two vessels to the customer on time: First half of 2021 and second half of 2022 respectively.

What is next for Naval Group’s Lorient shipyard ?

Following the launch of its last FREMM, Naval Group will gradually transition towards the FDI program, the next generation of frigates for the French Navy. The first steel-cut ceremony of the first FDI (Defense and Intervention Frigate) took place at the Naval Group shipyard in Lorient in October 2019. The keel laying of the Amiral Ronarc’h frigate (the name of the first FDI) in the covered construction dock is set for November 2021.

Meanwhile two Gowind corvettes “intended for the international market” will occupy the construction form in Lorient. These vessels are set to be delivered in late 2022 / early 2023. Naval Group can not disclose the final customer. Naval News understands however that the two corvettes are intended for the UAE Navy. The United Arab Emirates has signed a contract on 25 March 2019 for 750 million Euros (USD850m) for two Gowind 2500 type corvettes with options for two more, to be built in partnership with local shipyard Abu Dhabi Ship Building Company (ADSB). They will be equipped with Naval Group’s SETIS combat management system, MBDA’s Exocet missile, Raytheon’s Evolved Seasparrow Missiles (ESSM).

In parallel, Naval Group Lorient is still busy with the two FREMM DA: Alsace continues her sea trials and will be delivered in the summer of 2021 while Lorraine will now be outfitted for a few month, pier-side at the shipyard, ahead of her sea trials with a delivery set for November 2022.

According to Naval Group, the FREMM DA Alsace and Lorraine are strongly armed surface combatants fitted with the most performant weapon systems and equipment such as: the Herakles multifunction radar, the Aster 15 and 30 surface to air missiles, the Exocet MM 40 anti-ship missiles or the MU 90 torpedo. The performance of their combat system are reinforced with increased radar and communication capacities, a new fire control radar, and a SETIS CMS fitted with specific anti-air defense functions.