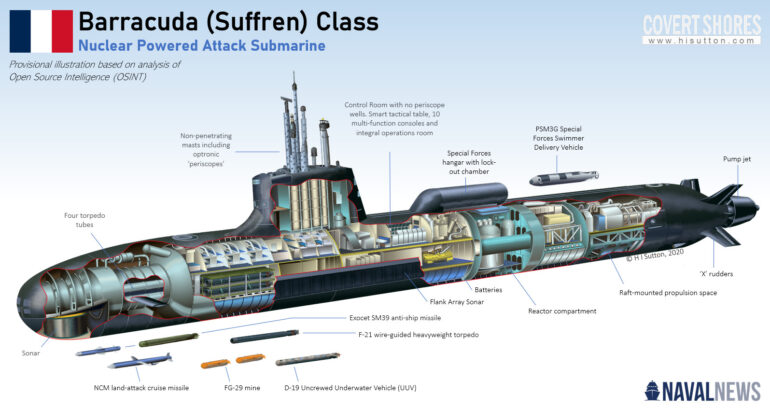 The Suffren class is more than an iterative improvement on the Rubis-class. It will provide a broader capability, able to take on a wider range of missions.

As part of Naval News' official coverage of Euronaval 2020, renowned submarine expert H I Sutton looks at the new Suffren-class of submarines and explains why it will be a game changer for the French Navy.

Six new attack submarines will form the vanguard of the French Navy (Marine Nationale) for the coming decades. Developed as the Barracuda program, the lead boat of the new class, Suffren, is expected to formally join the fleet next year. The new submarines will offer a massive capability leap over the current Rubis-class boats.

Among the improvements, the Suffren-class will be armed with a wider spectrum of weapons. The latest F-21 heavyweight torpedoes will provide the core anti-submarine and anti-ship punch. These electric-powered weapon can use rechargeable lithium-ion batteries for training shots, and one-time aluminum silver oxide batteries for war shots. With a speed of over 50 knots it can reach targets over 27 nautical miles (50 km) away.

The other new weapon carried will be the Naval Cruise Missile (NCM). This is generally equivalent of the Tomahawk land attack cruise missile (LACM). Cruise missiles will provide the Suffren-class with a first-night strategic strike capability. This will reach deep inside enemy territory, a capability few other navies will have.

The weapons load-out can be rounded out with the FG-29 mine and Exocet SM39 anti-ship missile. Both of these are already carried by Marine Nationale submarines.

In the future, torpedo-sized UUVs (uncrewed underwater vehicles) may also be carried. Naval Group’s new D-19 type might be ideally suited. These can carry out a wide range of missions including Intelligence, Surveillance & Reconnaissance (ISR), electronic warfare (EW), anti-submarine warfare (ASW),mine counter-measures (MCM) and mine warfare.

Its not only the broad array of weapons that will set these boats apart. The ultra-modern sensor masts by Safran Electronics & Defence are another key modernization. They are all non-penetrating, which means that they do not go inside the pressure hull. This will make the submarine safer if there is a periscope collision. It also means that the control room does not have to be in its traditional location directly under the sail. In Suffren‘s case it is further aft behind the sail.

The Control Room is much larger than on older submarines. The captain is seated against the back wall, affording him or her an excellent view of the ten multi-function consoles. The center of the room, where the periscope wells used to be, is now dominated by a touch-screen tactical table. And the Operations Room is there, integral to the command center.

Among the missions which can be run from the Operations Room are the landing of Special Forces. The Marine Nationale has a strong tradition of naval special forces and pioneered many aspects of these operations. For example, detachable hangars for Swimmer Delivery Vehicles (SDVs).

The Marine Nationale stepped away from this capability with the retirement of the Agosta-class submarines twenty years ago. But the Suffren-class are part of a new generation of western submarines with special operations capabilities designed-in from the start. They have a large lock-out chamber for combat swimmers and the hangar can be fitted directly over it. Inside can be the latest PSM3G swimmer delivery vehicle.

The Suffren-class is more than an iterative improvement on the Rubis-class. It will provide a broader capability and is able to take on a wider range of missions.