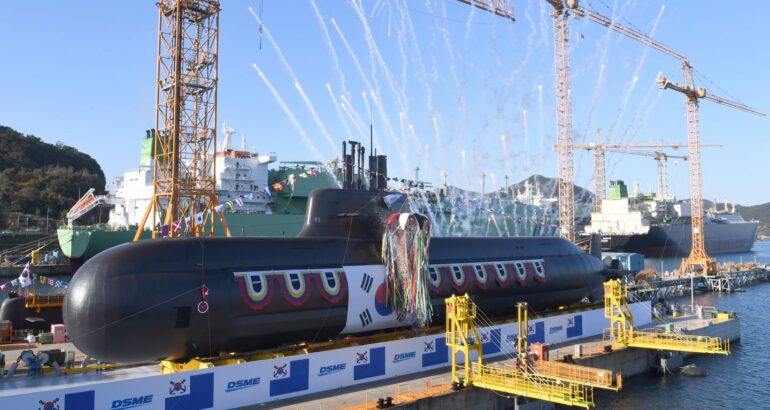 Meanwhile, the first submarine of the class, ROKS Dosan Ahn Chang-ho, continues sea trials. ROKS Ahn Moo is expected to be commissioned in 2022.

With the KSS III program, South Korea has entered the elite club of the few countries able to independently design and build submarines, especially large ones (over 3,000 tons).

For the record, DSME received a contract from the South Korean Ministry of Defense worth $ 1.56 billion to build two large conventional/diesel electric (SSK) KSS III Batch 1 submarines on December 26, 2012. Then, on November 30, 2016, Hyundai Heavy Industries received a contract to build another boat of the first batch. Delivery of all three boats is scheduled for the end of 2023. In total, the plan is to introduce into the RoK Navy fleet nine KSS III submarines by 2029: including three ships of the second and third series each.

However, the program of construction of the KSS-III submarines underwent repeated delays for technical and financial reasons, which is to be expected for such major programs.

With KSS III, South Korea moves into the small club of countries which can design and build submarines. South Korea has been building German designed submarines for some years, but this boat is much more than a scaled-up German design. With its land-attack cruise missiles it will provide a new capability to the South Korean Navy.  It is the first non-nuclear submarine in the world to be fitted with a vertical launch system (VLS). This allows the carriage of weapons which are not suited to be launched from a regular torpedo tube. The South Korean Navy is already qualitatively far ahead of their North Korean adversaries. The KSS-III program shifts the bar yet again, and also makes them more competitive against other local navies.

KSS-III Batch 1 submarines are fitted with eight 533-mm torpedo tubes as well as 6x VLS (vertical launch system) tubes. They would accommodate a future cruise missile (the Cheon Ryong with a range of 1,500 Km) in development by LIG Nex1 while the launchers would be provided by Doosan. It was announced earlier in the program that Spanish company INDRA was selected to provide its electronic defense system (ESM) PEGASO and Babcock of the UK would design and manufacture the Weapon Handling System for the Batch-I submarines. French companies Safran is supplying the optronic masts for the class and ECA Group the steering consoles. Other South Korean content include the flank array sonars (provided by LIG Nex1) and the combat management system (provided by Hanwha).

The keel laying of the second vessel SS 085 ‘Ahn Moo’ took place at DSME shipyard on July 1, 2016. Hyundai Heavy Industries in Ulsan started construction of the third boat and final vessel of the first batch, SS 086 ‘Yi Dongnyeong’, on June 30, 2017.