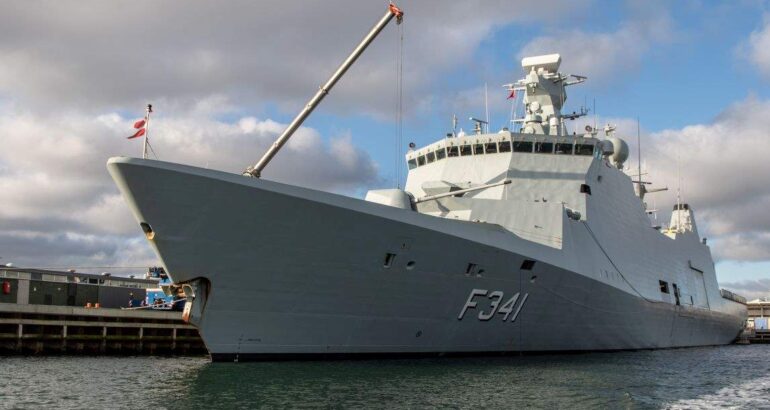 HDMS Absalon received a new pennant number (F341) as she reclassified as an ASW frigate in October (Credit: Danish MoD)

The Danish Ministry of Defence's Materiel and Procurement Agency (FMI) has launched a tender for the acquisition of low-frequency towed array sonar systems (TAS) for the Royal Danish Navy two Absalon-class frigates.

The sonar systems will be installed on the HDMS Absalon (F341) and Esbern Snare (F342) frigates, which were reclassified from support ships to anti-submarine warfare (ASW) vessels on October 19. The two frigates are expected to be fully equipped for ASW mission by 2026.

This leave plenty of time for the procurement of towed sonars and computer equipment followed by adaptation work, test and certification of the ships. The future ASW equipment must also be integrated in the ship’s combat management systems. In addition, crew members will be trained on simulators in order to be ready to use the new equipment once operational.

The sonar systems will enable the frigates to carry out complex ASW operations both independently or as part of a larger naval force. The low-frequency towing sonar will give the vessel the capacity to track submarines at significantly larger distances than today. In contrast to the current sonar, which is mounted on the hull, the sensor part of the towing sonar system can be placed at a tactically advantageous depth, which contributes to enlarge the tracking distance.

This gives the Danish ships a modern capacity, which in the future will make it possible to be part of NATO’s ASW areas of operation.

The publication of a tender notice is the culmination of a long process in which FMI, in close collaboration with the Danish Navy Command, has prepared the extensive material to ensure that the desired equipment is procured.

The next challenge will be to select the company that will supply the more effective solution. A contract award with the preferred bidder is expected to be signed in mid-2022.

Modern sonar systems available today include (but is not limited to) the Wass Atas by Leonardo, Ultra Electronics, ACTAS by Atlas Elektronik, GDMS Canada or the CAPTAS-4 by Thales. For the record, Thales signed a contract this year with a Danish company to provide piezoelectric components for Thales future Sonar solutions. This would put Thales at an advantage, considering the fact that the CAPTAS-4 is composed of four ceramic rings.