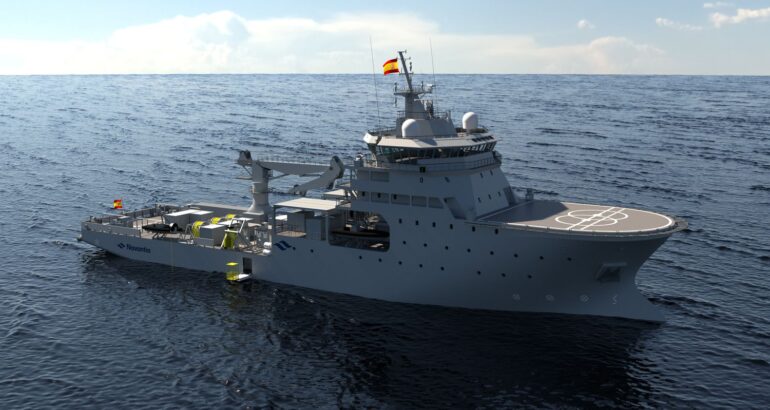 The Spanish government has approved the construction of the BAM IS (Underwater Intervention Maritime Action Vessel) submarine rescue vessel. A contract will be signed in early 2021 with the local shipyard Navantia for a delivery expected in 2024.

Spanish Navy’s submarine rescue capability currently relies on the sole 45 year-old Neptuno (A-20) Amatista Mod-class vessel. Launched as a tug boat in 1975, it has not yet been scrapped because it is needed for diving exercises.

Neptuno is not adapted for the future Isaac Peral-classe S-80 submarines the Spanish Navy plans to induct starting 2021. Among other limitations, the Neptuno can’t board a remote-controlled or rescue vehicle or remain fixed at sea (supplying oxygen, water, or food to a submersible in distress) except by deploying all four of its anchors: Something impossible to do while in rough seas.

The Spanish Navy has been demanding the construction of the BAM IS for years and, finally, the Ministry of Defense has included the topic in its 2021 budget. The program should cost around €167 million for the ship and €25 million for specific equipment.

The BAM IS will feature a side-scan radar, two hyperbaric chambers, two ROVs, two underwater communication systems, emergency supply systems and an helipad. It is based of the Meteoro-class offshore patrol vessel design the Spanish Navy already operates, but features a higher tonnage and double decks.

The future rescue ship will be designed to house the NATO Submarine Rescue System (NRSS), which includes a remotely operated submersible (SRDRS). This mini-submarine is at the disposal of NATO countries and ready to be deployed in 72 hours in case of emergency.

About BAM IS submarine rescue ship