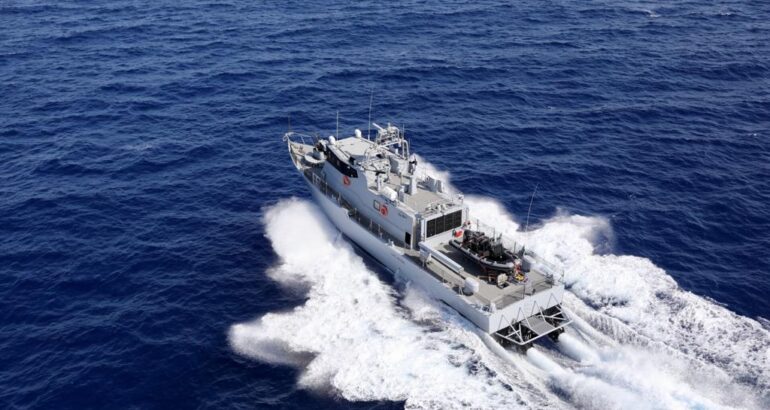 The first two Shaldag MK II vessels, Anambe and Soungrougrou, were delivered in 2019. All four vessels (three Shaldag MK II and a single MK V) are part of the same contract signed between Israel Shipyards and Senegal.

All Shaldag class vessels are designed for coastal and riverine protection as well as variety of HLS and special forces missions. « Both the Shaldag MK II and MK V are combat proven vessels with thousands of hours of sea time and operational and combative experience », an Israel Shipyards representative told Naval News.

The vessels vary in physical characteristics which, mainly the length overall of the vessels (MK II – 25.30, MK V – 32.65) and the tonnage (MK II – 60 tons, MK V – abt. 95 tons). While the physical characteristics are different, this affect mainly the payload carried as the missions and maneuver capabilities remain similar, with high speed of over 40 knots for the MK V and over 45 knots for the MK II.

The Shaldag MK II is usually equipped with 23-30mm, 12.7mm remotely controlled weapon system and electro optical device, as well as light machine guns. The Shadlag MK V can be equipped with short or medium range surface-to-surface missiles as well as tactical drones and other technological assets in addition to the basic assets mentioned for the MK II.

Besides FPCs, Israel Shipyards plans to deliver two OPV 45 for a customer the company refused to undisclose. They will be delivered within 24 months after a successful first steel cutting ceremony and kick-off meeting with the customer’s representatives.

Faced with an ever growing piracy threat in the Gulf of Guinea, Senegal (like other countries in the area such as Côte d’Ivoire, Ghana or Nigeria) is pursuing efforts to boost its naval capabilities. As we reported at the time, Senegal and French shipbuilder PIRIOU signed last year a procurement contract for three OPV. The vessels will be fitted with missile systems which will be a new capability for this emerging navy.

Other modern units include a large OPV procured from French shipyard OCEA, the Fouladou, commissioned in 2016 and two smaller patrol vessels (by Raidco Marine) procured in 2015 and 2013. Senegal is also procuring Maritime Patrol Aircraft.