Russia' sole aircraft carrier is getting upgraded with Pantsir-M close in weapon systems (CIWS). The "Admiral Kuznetsov" is currently getting repaired and overhauled at the 35th shipyard in Murmansk following a fire that erupted one year ago.

The installation of the Pantsir-M systems aboard Admiral Kuznetsov aircraft carrier upgraded by the 35th shipyard in Murmansk has been confirmed. In April 2018, then Navy Deputy Commander-in-Chief Viktor Bursuk said the carrier would be armed with Pantsir-M. It is to replace Kortik and AK-630 CIWS. The carrier has six of them each. However, it is possible that close-range air defense would be ensured by Pantsir-M and AK-630. Six or eight combat modules and two command modules are likely to be installed on the carrier after modernization.

In October 2016, KBP Managing Director Dmitry Konoplev said the aircraft carrier would get six Pantsir-M combat modules. They will replace Kortik. Two if its combat modules are placed at the bow and the rest at the stern. Six Pantsir-M will also be fitted aboard the Admiral Nakhimov cruise as well as the Peter The Great cruiser. Open sources said the latter has to become operational in 2022.

A fully equipped Pantsir-ME system (the export variant) with eight missiles and a thousand shells weighs 7100 kg. The crew comprises the commander and the operator. The launcher can destroy air targets flying at a maximum speed of 1000 m/sec. The inclined range of the missile is 1500-20000 meters and from 2 to 15000 meters in altitude. The range of artillery guns is 500-4000 meters and 0-3000 meters respectively. 57E6-E1 missile develops a speed of 1300 m/sec. The warhead weighs 20 kg and the missile — 98 kg. The rate of fire of artillery guns is 10000 shots per minute and the initial speed of the 30mm shell is 1120 m/sec.

According to recent media reports, the Admiral Kuznetsov remains scheduled to start sea trials and join the Navy in 2022. This however appears somewhat ambitious as there is still a lot of work left to be carried by the shipyard.

Russian Aircraft Carrier To Rejoin The Fleet In Late 2023

Martin Manaranche 24 Jun 2021
The Admiral Kuznetsov aircraft carrier of project 11435 will complete the overhaul and upgrade in 2023 and will rejoin the Navy in the end of the year, Vice President of the United Shipbuilding Corporation (USC) Vladimir Korolev told TASS at the Navy salon.

Naval News Staff 14 Apr 2021
Russian Defense Minister Sergey Shoigu called to accelerate the overhaul and upgrade of the dry dock of the 35th Shipyard in Murmansk... 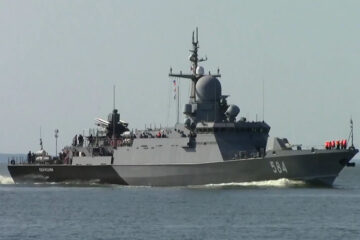