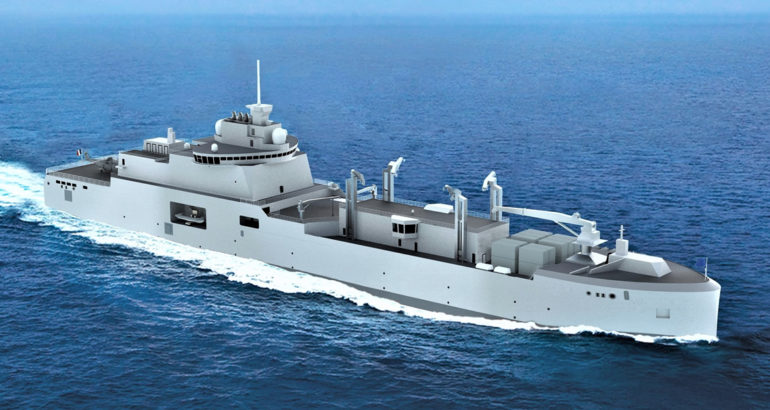 Damen Marine Components (DMC) has been awarded a contract by the Chantiers de l'Atlantique for the supply of rudders and steering gear systems for the French Navy's future Jacques Chevallier-class Logistic Support Ships (BRF).

The rudder design is carried out by DMC’s engineers in Hamburg and will be CFD optimised for the ship’s operational profile, with special focus on cavitation behaviour, course-keeping and maneuvering, essential attributes for naval vessels of all types and particularly for support vessels transferring fuel and supplies at close quarters whilst underway. This capability is due to their open flap linkage mechanisms and side bar flap systems with a 90-degree angle. They also emit minimal noise and vibration.

The Van der Velden COMMANDER Rotary Vane steering systems are also ideal for high performance, oceangoing operations. Designed and manufactured wholly in the Netherlands, they generate an equal high torque in all possible steering angles, and with only one rotating part is both highly safe to operate and relatively low maintenance. The systems being supplied to Chantiers de l’Atlantique will be fully compatible with the performance requirements of the TIMON rudders.

With a fuel and freight capacity of 13,000 m³, the ships will provide logistical support to combat vessels of the French navy – in particular the Charles de Gaulle carrier group – and its allies.

“We are very pleased to have won this prestigious steering gear contract for these strategically vital vessels,” said Mr. Wim Knoester, Director of Sales and Marketing at DMC. “They will underpin the global reach of the French navy for many years to come and we are confident that our TIMON rudders and COMMANDER™ steering systems will deliver the performance and reliability required of them.”