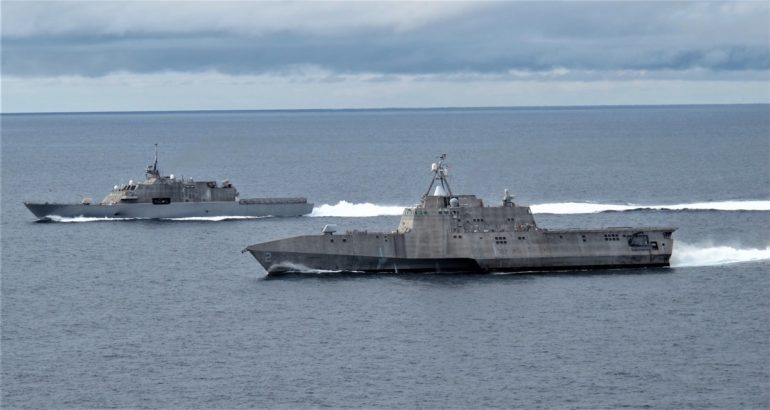 The Littoral Combat Ship (LCS) was a “Hot Topic of discussion” at Surface Navy Association (SNA 2021) Virtual Symposium held in mid-January 2021 during the end of the President Trump Administration. The U.S. Navy discussed the status, plans, upgrades, new weapons, fixes, and Mission Packages of this troubled and often criticized program.

The U.S. Navy has Working Plans for these Warships.

In a statement to Defense News, the U.S. Navy pointed to “a material defect” with the ship’s combining gear, a complex transmission that transmits power generated by the ship’s engines to its waterjet propulsion system, and said it is working to design a fix for in-service littoral combat ships while holding off on taking delivery on new ships.

RDML Casey Moton, USN, envisions giving more self-sufficiency to the LCS crews to make their own repairs and hopes to make quick progress addressing these maintenance issues. In addition, the U.S. Navy announced late last year that it would test Spearhead-Class EPF USNS Burlington as a maintenance and repair vessel for Littoral Combat Ships.

The “LCS Strike Team” is also in charge of a few studies, such as a “2016 LCS Study” addressing LCS issues with the crew, maintenance, and training.  This study is set to conclude soon while another study will address the lethality of the LCS.  Nonetheless, the Vice-Admiral did state that the U.S. Navy has to determine what missions the LCSs are suitable for to accomplish. VADM Kitchener believes in pushing out the LCS and sustaining the [shipyard construction] program as the VADM sees the LCSs as very useful platforms and plans to “Deliver [them] with a sustained plan.  We got to meet that requirement,” said VADM Kitchener.

“Every LCS will get NSM. Gabby Giffords is doing the things that we want her to do. How do we make her more lethal?”

All LCSs are slated to receive the Kongsberg/Raytheon Naval Strike Missile (NSM) such as the USS Gabrielle Gifford outfitted with eight angled NSM launchers behind the 57mm Bofors bow turret.

The U.S. Navy will base their LCS lethality upgrades on the “LCS Lethality Study.”  RDML Casey Moton, USN, explained that the NSM and Lethality Upgrades will be a permanent part of the LCSs and won’t be a swappable module.  Moton stated that NAVSEA intends for all LCSs to have the NSM and M53 NULKA active missile decoy capability added. (LCSs will also receive Electronic Warfare Countermeasures and armor to protect vital spaces).

While the NSM launchers will go behind the 57mm gun turret on the Independence-class trimarans, no mention was made on where to place the NSM launchers on the USS Freedom-class LCSs. Back at SNA 2019, Lockheed Martin showcased an “over the shoulder” configuration, with the launchers fitted forward, but aiming towards the back, as shown in the video above.

U.S. Navy intends for the LCS to replace the Patrol Coastal boats

The U.S. Navy plans to have the LCSs replace the Patrol Coastal (PC) Boats that are nearing their retirement age:

However, do note that SNA 2021 was held virtually in mid-January 2021, in the waning days of the President Donald Trump Administration and before President-elect Joseph Biden took office on January 20th. Therefore, U.S. Navy decisions may change during the new Biden Administration’s four-year term.

When asked at the Virtual Symposium if the Littoral Combat Ships will be forward-deployed around the world, including the INDO-PACOM region, RADM Paul Schlise, USN, Director, Surface Warfare (N96) spoke frankly, “How many [LCS] do you want to go into your fight unarmed?” in which the Rear Admiral’s presentation partner, U.S. Marine General Tracy King agreed. The U.S. Navy acknowledges that the LCSs are currently under-armed without the addition of the eight Naval Strike Missile launchers, and will determine deployments based on the LCS Studies and the LCS Homeporting Plan. So far, RADM Schlise noted, that the U.S. Navy is satisfied with the current deployments and laydown of the LCS Homeports, including deploying to Singapore in the Western Pacific.

The Avenger-class Mine Warfare vessels are slow ships, with a top speed of 14 knots.  Avengers neutralize mines with the AN/SQQ-30 or AN/SQQ-32 mine detection sonar, depending on ship fit.  They are just armed with two .50cal M2HB Browning heavy machine guns on mounts.

“Once a mine is detected, the Avenger deploys an unmanned, tethered submersible called the EX116 Mod 0 (AN/SLQ-48) guided via a 3,500-long cable –that can dispose of mines with explosives, or by cutting cables connecting to mines to the seafloor or to their mooring rig just below the waves.  The Navy built 14 and 11 were in service as of August 2018, split between naval bases in Bahrain, Japan, and San Diego.  The first two of the ships, USS Avenger and Defender, decommissioned in 2014, while the Guardian, commissioned in 1989, struck a reef off the Philippines in 2013, ending the vessel’s career,” stated WARSHIPS, Guide to the US Navy, 2019.

Since WARSHIPS 2019’s publication in Fall, 2018, USS Ardent, Scout, and Champion have since been decommissioned in August 2020, bringing the total active-duty Avenger MCM vessel count to eight. But how effective, efficient, and expensive is using a LCS with a Mine Countermeasure (MCM) Mission Module Package compared to a slower and rapidly aging wood-covered-with-fiberglass hulled Avenger-class MCM ?

Lieutenant Roxanne Sumanga of the MCM Naval Mine Warfare school replied as to how expensive it is to operate the LCS with a MCM Package on demining operations:

“Bottom line: It’s expensive, the reasons being that some of these systems on the LCS Mission package have technologies that have not yet existed so we have to research and we have to look into these technologies and build them up and that cost money. I think that anything that is new and shiny is going to initially cost money.  And when the systems are in full production and fully fielded, it will drive down the cost, but for now it’s expensive and that is just the nature of Acquisitions in buying something new.”

Naval News also asked how faster the LCS can neutralize mines compared to the Avenger MCMs that the LCS is replacing in this role:

“The time piece is a little bit more tricky.  So generally as MCM Officers, we’re always working against time.  So regardless of platform, regardless of systems, we can always finish faster. The question is how much risk are you willing to inter?  [Example] So we can take a channel [and] clear it in 10 days, [and do it] by 7 [days].  Are you willing to sail through a channel with 40% risk?  So the time piece is relative.
Now as far as LCS goes…to say that is it getting faster or more time consuming…  Today, it is clear and faster because we have [MCM] systems [that the LCS] didn’t have five years ago.  Five years into the future, we should have these [LCS MCM] systems, if managed correctly, that you can employ all at once.
Compare the LCS to the MCM Avengers. If the Avenger acquires a mine via sonar, it can do a run to detonate the mine.  With an LCS using unmanned systems, the LCS sends out the drone, gathers the data, analyzes it, and if questionable, sends out the drone again, do a different pattern to gather more data and then analyzes it again, and then send out a system to neutralize the mine.  So, for an Avenger that can detect and destroy a mine in four hours, it might take the LCS an entire day and that is because the LCS cannot do a single sortie to detect and engage and relies on unmanned systems. So, it’s like comparing apples to oranges when you look at the LCS and the Avenger.  But looking forward, I think that the LCS, when compared to the LCS itself, the LCS [of today] can clear [mines] faster [than an LCS five years ago with immature and untested MCM packages].”

LT Sumanga of the MCM Naval Mine Warfare school