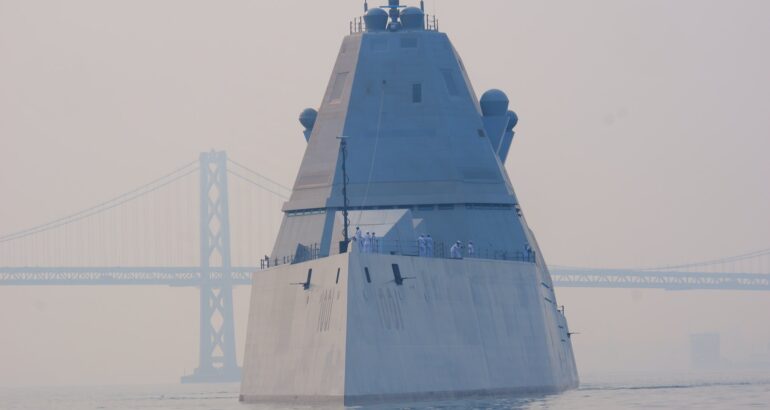 Here is the latest information on the status of the three DDG 1000 Zumwalt-class guided-missile destroyers as shared by the U.S. Navy during the Surface Navy Association’s 2021 virtual symposium, held mid-January, and more recently to other defense media.

The U.S. Navy has Working Plans for these Warships

NAVSEA and the U.S. Navy are exploring the option of rounds for the 155mm Armored Gun System (AGS) and adding a Hypersonic missile variant to the 80 Mark 57 Vertical Launch System (VLS) cells, a larger variant of the Mark 41 VLS. Through Open-Source Intelligence websites, more information can be deferred regarding these three stealthy, unique, one-of-a-kind high-tech tumblehome hull warships as a follow-up to the previous Naval News articles on the Zumwalt destroyers.

“Make no mistake about it, these three ships will be mainstays of a powerful maritime presence in the Western Pacific.”

According to NAVSEA, these three stealthy high-tech Zumwalt destroyers have changed their missions from Land Attack to Surface Warfare, otherwise known as the sinking of other ships, due to the lack of available production rounds for their 155mm (Land Attack) Armored Gun Systems’ (AGS) magazines, making the 155mm AGSs still in the inactive state as of January 2021.  The original intended 155mm long-range attack projectiles just cost too much, in the hundreds of thousands of dollars per round, and hence the U.S. Navy canceled the AGS shell program.

The Zumwalts will carry the $1 million each Maritime Strike Tomahawk reprogrammable in-flight cruise missile, Block Va, with a 1,000+-mile range and a new seeker and warhead. According to Admiral Michael Gilday, USN, Chief of Naval Operations at SNA 2021, the U.S. Navy plans to incorporate Hypersonic missiles to the nuclear Virginia-class attack submarine fleet first, and then on the DDG 1000 destroyers.  The three Zumwalt destroyers should be the first surface warships to possess Hypersonic missiles due to their larger Mk 57 VLS cells. Breaking Defense confirms this plan of action in their February 2021 article.

Admiral Gilday also discussed incorporating lasers onto surface warships with the deadline goal of having both lasers and Hypersonics with Initial Operating Capability by 2025.  To which Congressman Joe Courtney, Chairman, House Armed Services Subcommittee on Seapower and Projection Forces added that when it comes to next-generation weapons for the Zumwalts [think railguns, 155mm smart GPS extended range rounds, 155mm Hypervelocity (HVP) rounds, or new longer-range missiles], the Biden Administration will have to address this as some ideas worked and some ideas didn’t on the DDG 1000s [the Congressman didn’t elaborate].

“[The] Navy continues to consider all options to include development of a round compatible with AGS or repurposing the available space should the gun be removed in a future availability.”

“We’re interested in moving lethal capability out of VLS cells so we free up these cells for more long-range offensive firepower missions that distributed lethal sea control and power projection capability that CNO [Gilday] spoke of. And we’re moving to get bigger VLS cells to carry bigger, faster, longer-range missiles.  It’s not a question of if we’re going to do it.  It is a question of how quickly.”

Rear Admiral Schlise did mention that the U.S. Navy does not plan to use the DDG 1000’s tumblehome hull as the basis for the future DDG(X) destroyer replacement, citing that a totally new hull and power plant system is required for the DDG(X) to power future systems that haven’t yet matured.

NAVSEA’s Mr. Tom Rivers, Executive Director, PEO Ships for Amphibious, Auxillary, and Sealift said that the DDG 1002, USS Lyndon B. Johnson, is 97% complete and that the other two Zumwalts are undergoing testing as of mid-January 2021.

Through Open-Source Intelligence, U.S. Navy’s DDG 1000, 1001, and 1002 Facebook photos, and from official NAVSEA correspondence, Naval News is able to comment a little more on the capabilities of the three DDG 1000 warships.

NAVSEA replied to the question on if the Zumwalts will receive new SPY radars and sensors:

“The Navy is exploring several alternatives to sustain air and surface search capability aboard the Zumwalt-class ships but no decision has been made at this time.”

“A full ship quarter-scale Underwater Explosion (UNDEX) whipping test series was conducted in 2005 to validate the design approach and ruggedness of the hull structural design. The tests demonstrated the design capability of the tumblehome hull against design and threat level scenarios,”

Naval News also asked about the stanchions because some may have believed that they were stealthy pop-up stanchions…they are not and do not retract into the hull and thus have to be manually emplaced:

The Zumwalt-class guided-missile destroyers have an Anti-terrorism self-protection duty in the form of carrying portable and removable pedestal-mounted 7.62mm M240 medium machine guns on the deck and .50cal M2HB heavy machine guns positioned through removable hull hatches along the sides.  There appears to be three removable hatches around the bow to the first 155mm AGS, a large hatch amidships, two hatches at the stern sides below the helicopter landing pad, and two hatches facing the rear flanking the RHIB doors.  Removable machine guns are often deployed when the destroyer is sailing near the coast, in the littorals, or docked at a port for sentry and close-in defensive security reasons.