Russia’s Khabarovsk Submarine to be Launched in Fall 2021

The Khabarovsk nuclear submarine (project 09851), which is the second sub designed to carry the Poseidon underwater craft, will be floated in autumn, a defense industry source told TASS.

“The floating of the Khabarovsk was postponed by several months — from May to the autumn of 2021,”

The Khabarovsk is the second Poseidon carrier. The first one is the Belgorod submarine of project 09852. It was floated on April 23, 2019. Both submarines have to carry six Poseidon each.

This boat is similar to but smaller than the Project 955 ‘BOREI’ (пр.955 “Борей” – BOREI) SSBN. Working off a similar hull diameter to the BOREI, Covert Shores was able to estimate the submarine’s length as 120m versus 160m for the BOREI. This makes sense as the Khabarovsk does not require the missile section behind the sail. And it is even possible that it shares many components and even hull sections with the SSBN. The stated displacement of 10,000 tons makes it massive, but is much lighter than the 13,000 ton BOREI.

Martin Manaranche 03 Aug 2021
The Russian Ministry plans to expand the capabilities of project 20380 corvettes. The Izvestia daily said the warships may be armed with unmanned underwater craft to fight mines. 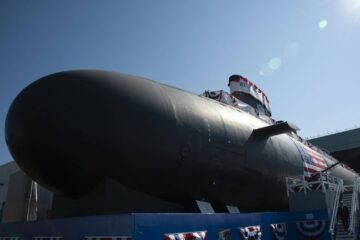 Martin Manaranche 02 Aug 2021
Northrop Grumman Corporation is continuing production of Launcher Subsystem hardware in support of the Columbia and Dreadnought common missile compartment (CMC) program. The company was awarded an additional $69 million not to exceed contract modification in support of the program in March of this year.