While the aircraft is Senegal’ third CN-235, it is the first one in MPA configuration. The one delivered back in 2017 by PTDI came in a “quick change” configuration (it can be reconfigured quickly for various missions including general transport duties, VIP transport and MEDEVAC).

PTDI officially handed over the aircraft on March 19 at the company’s facilities in Bandung. Senegal has been using PTDI-produced aircraft for 10 years.

“PTDI is Indonesia’s pride and the hopes of the nation. We are in need of aerospace technology in the industry,” said Indonesian Defense Minister Prabowo Subianto in a written statement.

“We hope we will be as satisfied as [we did at] the previous two planes,” added Senegal Chief of Air Force Papa Souleymane SARR.

Faced with an ever growing piracy threat in the Gulf of Guinea, Senegal (like other countries in the area such as Côte d’Ivoire, Ghana or Nigeria) is pursuing efforts to boost its naval capabilities. As we reported at the time, Senegal and French shipbuilder PIRIOU signed last year a procurement contract for three OPV. The vessels will be fitted with missile systems which will be a new capability for this emerging navy. Other modern units include a large OPV procured from French shipyard OCEA, the Fouladou, commissioned in 2016 and two smaller patrol vessels (by Raidco Marine) procured in 2015 and 2013. Israel Shipyard was set to Deliver a 3rd Shaldag MK II Fast Patrol Craft To Senegal this year. It has also surface that the launch customer for the OPV 45 design (by the same shipbuilder) is actually Senegal, with two vessels on order.

The modern naval vessels recently procured from France and Israel, plus the MPA will help the Senegalese Navy in securing the sea lanes and maritime approaches in Senegal’s littoral and exclusive economic zones. They are the right assets to counter piracy and illegal fishing and conduct maritime security missions in the Gulf of Guinea. 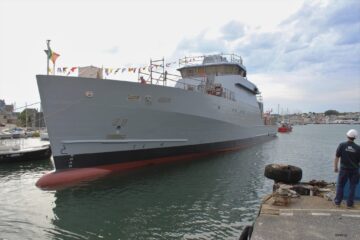