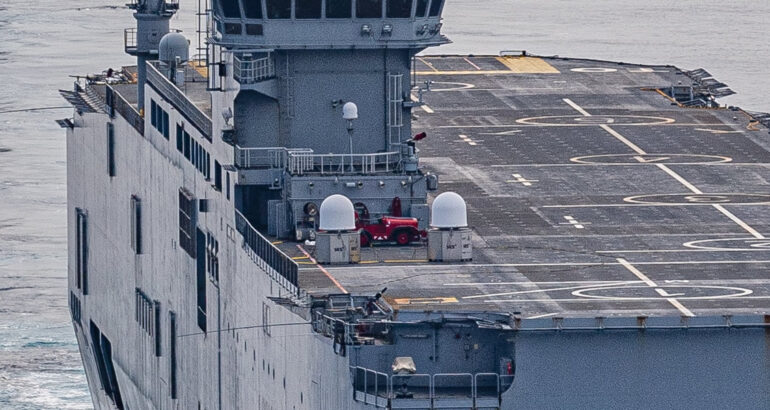 A new pair of antennas appeared on French Navy (Marine Nationale) Mistral-class LHD Tonnerre during its "Jeanne D'arc 2021" deployment. The unusual placement of the new systems (on the flight deck) and their rather large size had many people wonder what they were. Naval News contacted the French Navy to learn more.

The two “large white domes” were first spotted aboard Tonnerre as the vessel set sails from Toulon naval base to begin its “Jeanne D’Arc 2021” long duration deployment in Februrary.

Contacted by Naval News, a French Navy public affairs officer (PAO) explained that the two antennas are part of the “ARIANE” project. This experiment carried out on board Tonnerre aims to test new satellite communication (SATCOM) capabilities using a constellation of satellites placed in medium orbit, allowing much higher throughput and shorter latency.

Should this experiment be conclusive, it would bring significant gains in useful throughput, in line with the growth in needs.

Aboard Tonnerre, as part of the Jeanne d’Arc mission, this capability is currently providing services to improve the living conditions of sailors: It brings better Internet connectivity for the crew and student officers at sea as well as during calls in various foreign ports. The PAO further explained that:

This measure takes into account the evolution of digital uses, particularly among young people, and contributes to the retention of personnel by reducing the constraints inherent to being underway at sea.

For the record, Tonnerre and La Fayette-class Frigate Surcouf sailed the South China Sea a couple weeks ago alongside Royal Australian Navy vessels. The French vessels will take part in a combined amphibious exercise with US and Japanese forces in the coming days.