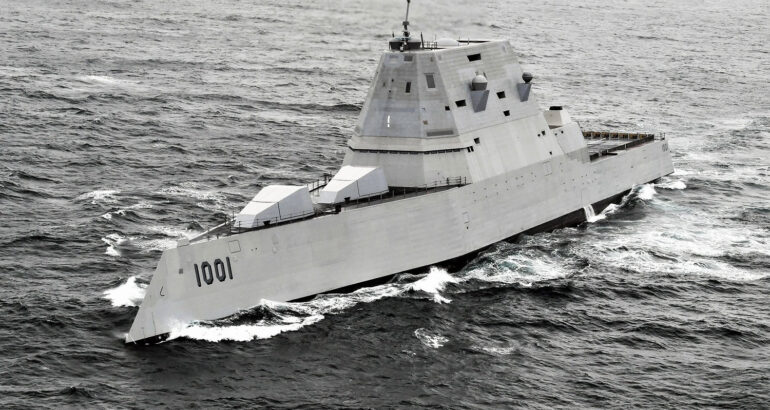 The U.S. Navy is set to debut its first at-sea hypersonic missiles aboard one of the service’s three Zumwalt-class destroyers in four years, Chief of Naval Operations Adm. Mike Gilday said on 27 April 2021.

This story was originally published by Sam LaGrone, USNI News on April 28, 2021.

Rather than have the Navy’s first weapons capable of traveling Mach 5 of faster fire from guided-missile submarines “by 2025,” as previously planned, Gilday said that the Zumwalts would be the first platform to field hypersonics during an event at the Center for Strategic and Budgetary Assessments.

“Fielding hypersonics on the Zumwalt-class destroyers will be an important move forward [to] turn that into a strike platform,”

Announced in 2017, the Navy is converting the trio of Zumwalts – USS Zumwalt (DDG-1000), USS Michael Monsoor (DDG-1001) and the under-construction Lyndon B. Johnson (DDG-1002) – into a blue-water strike platform from one designed to operate in the littorals and support forces ashore with guided rounds from dual 155mm guns.

Gilday didn’t specify the weapon, but USNI News understands Gilday was referring to the Common Hypersonic Glide Body (C-HGB) developed for the Army, Air Force and the Navy. The weapon is being developed for the conventional prompt strike (CPS) mission that aims to have a conventional weapon strike a target anywhere in the world with little notice.

“Our biggest R&D effort is in hypersonics — to deliver that capability in 2025 on a surface ship and then on Block V [Virginia-class] submarines,”

Gilday’s comments differ from the Navy’s earlier plans, announced last year, to initially field the hypersonic weapons on the existing quartet of Ohio-class guided-missile submarines (SSGN) and then the Block V Virginia-class attack subs that will replace them.

Vice Adm. Johnny Wolfe, the head of the Navy’s Strategic Systems Programs, said in November that the Navy could see a “limited operating capability” of the hypersonic weapon by 2025 in the SSGNs.

“I think we understand the technology: we’ve proven that in flight, we’ve proven that in the things we do. It really is transitioning to production, which we all know in any development program that anybody’s dealt with – the science is great, you go out and build one-offs, and then transitioning that to a very repeatable process so you get the reliability that you need, and that’s exactly where we’re at right now.”

The Navy has studied using a variant of the all Multiple All-up-round Canisters (MAC) system – developed for the Ohio class, which put seven Tomahawk Land Attack Missiles (TLAM) in the same space of a Trident-II D5 nuclear ballistic missile – to hold the larger C-HGBs. A decade ago the Navy researched packing three shorter-range ballistic missiles into a MAC and is using that work as a basis to field the new hypersonic weapons.

For Zumwalt, the Navy has studied replacing at least one of the 155 mm gun mounts with one or two MAC tubes to field the missile. While the study work is moving forward, there is not yet a program of record to modify the Zumwalts to field the tubes. Given the timeline laid out by Gilday, the money could likely be part of the Fiscal Year 2022 budget expected to emerge sometime in May, USNI News understands. It’s also unclear which platform would receive the missiles first.

Beyond the logistics of installing the capability, Gilday said the new hypersonic weapons would give the Navy new tools to make surface forces more effective in an era where ships underway would be easier to find.

“I think perhaps [hypersonics] may be the best example of how we want to bring that kind of capability forward in a distributed fashion, using distributed maritime operations, that come at the adversary at a variety of different vectors, to make it very difficult for them to target us […] “The other thing that naval forces bring to bear, which is not insignificant in the day and age of hypersonics, is the ability to be mobile. Not that we’re going to be able to completely hide in the future, right? One would think that over time there’ll be ubiquitous imagery coverage over the Pacific, whether those are military satellites or whether they’re commercial. That information will be available to an adversary, whether he or she purchases it, or whether they steal it, but it’s going to be difficult to hide.”

For the defense of ships, Gilday is pushing for the rapid development of directed energy weapons to counter the missile threat for hard-to-hide surface ships. He cited the Chinese drive to develop anti-ship ballistic missiles and new satellites as the driver to develop weapons that would take advantage of the power generation capability in the service’s latest ships.

“I think directed energy with respect to the future survivability of the fleet is really important. If you think about the fact that a Ford-class carrier generates three times the electrical power of a Nimitz-class, or that we’ve got excess power generation in Zumwalt-class destroyers […] We can have that same capability on an unmanned vessel, whether it’s medium or large, and that vessel traveling along with a strike group or a surface action group provides a higher degree of defense-in-depth coverage against an incoming threat.”